The Final Verdict in Forensics 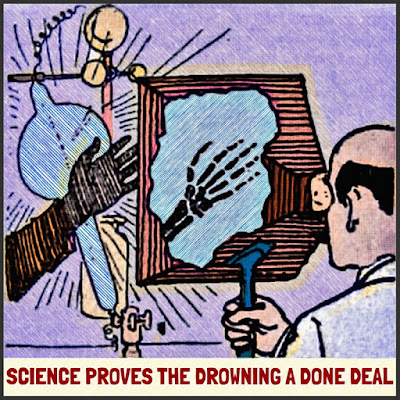 Part 15 of 31
They Found Another Body

In these days of anonymity — most of us going by fake names, carrying false ID, never answering our phones — it’s good to know somewhere in society it matters who we are.

Of course it doesn’t usually matter. I blend in, there’s nothing especially extraordinary about me, positive or negative. I got two legs and the usual number of everything else. I’m not hobbling along with one leg which would make me special. If I try really hard I can present myself as a responsible individual, saluting the flag, picking up litter and carrying it to the garbage, etc. Because I'm in the Big City I've learned as well as anyone to step demurely over dead bodies. Then there's my wild side. I take a devil-may-care attitude as well, which lets people know, That guy’s nobody.

But just let yourself be a victim — in a moment of weakness, you’ve gotten comfortable and some guy’s on you with a lead pipe — and next thing your wallet’s gone and your body’s floating in the river. You were nobody before, but that's when society springs into action. Where’d this guy come from? Who is he? What happened to him? The sirens are going off, every police car in town is swerving around corners, the blue and red lights flashing. They get to the river and they’re scouring the surface with flood lights. "That over there, that's either a stump or him!" You’re somebody!

Pulled in with a hook, they look for signs of life. Are you breathing? Is there any twitching, any babbling? If the answer is no, no, no, they call in the coroner, who takes one look and pronounces you dead. He pushes his hat back with his gun, wipes his brow, and says, "It's getting hot out here, Danny." The sergeant nods. The only sign of life they might find is if they tap your knee with a rubber mallet, your reflexes still work. Which is the same as being dead, but it once was a functioning joint.

Then at the morgue they turn on the apparatus that hums and clicks in one last effort scanning for life. It’s a great invention, holding out hope if possible, or taking away all hope and doubt. Whatever the cause of death, it's confirmed. If drowned, it seals the deal, giving the utmost assurance that the verdict is true, you are no more. It’s terrible to die, I’ve heard, but it can be worse for the survivors. The sergeant gets home, cleans his hands meticulously and even takes a shower. He's playing with the kids, oblivious to his somber exterior. He thinks, "They deserve their innocence."

Now it’s up to the Missing Sersons' department to call around. What calls has Missing Persons received? If none, the investigation takes a whole different path, discovering what they haven’t known to this point. They scope out the final verdict, who you were and what steps (1-2-3) led to this tragic point in your life. Another day, another dollar.
Posted by dbkundalini at 6:00 AM