Tiny, You're Huge In Pictures 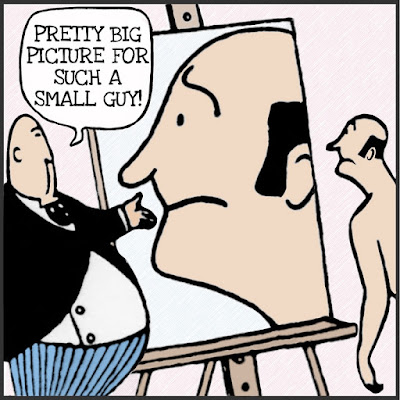 Part 12 of 31
They Found Another Body

Every story of someone being found — in the river, in the park, their den, the alley behind a strip club — starts somewhere. We could go way back, way way back, when these happy souls were prancing off to school. I’ve heard of cases where kids don't do that anymore, so it’s good to know we’re making progress. Even back then, we would’ve been better off staying home and learning what we needed behind the barn. The teachers were psychos, the principal, the lunch-ladies, the gym teacher, and certainly the guidance counselor. As soon as they saw you they hung out to dry, and, what goes up someone must cut down.

I spent an entire month decrying the psychotic (in practice) profession of guidance counseling. Ground I’d rather not cover again. Since I wrote that I’ve been temperamental and antisocial. I went to a dance and didn’t want to dance. Then a psycho came in and shot the place up. It took everything we had to talk him down. To make a long story short, I danced three or four dances with him and he went home and was apparently redeemed. Surprisingly, they dropped all charges because of the promise he showed as a dancer.

He and I didn’t share any guidance counselor stories, but I wouldn’t have been surprised to find that he had the same problems. Although the big difference between me and him would've been, I didn’t deserve the problems and he no doubt did. Definitely, he presented himself as a guy with multiple deep problems, problems gnawing away at him over the years, chewing at him, gutting him, emptying him out, literally making him rotten to the core. And whatever there is beyond a person’s core, I’m sure it had several negative aspects as well, if I had to judge, off the charts rotten.

What I’m really thinking is, What would it have been like had I been his guidance counselor? Say I went into guidance counseling. It’s not impossible to imagine. I’m idealistic. I could've gotten in there, whatever the situation was, and done it right. I’ve seen it done wrong all my life, I could train guidance counselors single-handedly. But the first thing would be to throw away their books and diagnostic notecards. We’d grind them up and have them danced on by exorcists. Then start fresh. With great techniques, the best techniques that technicians have never even imagined, technically speaking.

For instance, I wish I could've helped this guy, the hapless subject of a rather large painting. A man of greater girth makes an innocent remark that insults him. "You’re tiny, your picture is big, that is to say, you’re a tiny shrimp of a man and don’t deserve such a big likeness. Or you’re a small man and having a big picture makes you look smaller yet. We could make the biggest picture of you in the world, a canvas stretching across the Grand Canyon, then when you see it, we’d know you were a speck of dust just waiting to blow away, to blow violently against something, like a bug hitting the windshield. In your case, you’d hit your own huge picture like a speck of dust against one of the painting’s county-wide nostrils. You're tiny, tiny, tiny, nothing.”

Not a good tact. And what happened next ... which was before I heard the case and could've helped … it's unfortunate, too tame a word for it ... but at least we still have the painting to remember him by.
Posted by dbkundalini at 6:00 AM