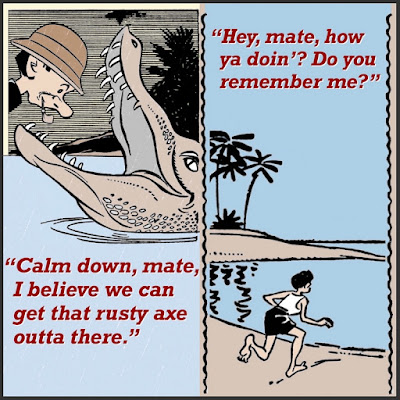 Part 19 of 31
They Found Another Body

O the sad innocence of this poor idiot! Born without a single enemy. Everyone’s his bosom buddy, his best friend. Or so he thinks. Well, I’m not his friend,and I’m as nice a guy as you’ll ever find. But, c’mon man, sticking your arm down an alligator’s throat and expecting it to be your friend?

Sure, I know some people are like that, so merciful they can’t leave well enough alone. When all the time, our purpose is not to live forever, but to live through Life’s Day, then pass on to our reward — for some the fires of Hell, for others like me the Gravy Train of Glory on High. Oh yes, I haven’t been perfect, but that doesn’t matter. I’ve got the inside track: “I’m lookin’ over Jordan and what do I see, comin’ for to carry me home?” It ain’t an alligator comin’ for to eat me down, that much I can say, and that's absolutely doctrinally true. Although — even if it was — alligator or no alligator, the Gravy Train of Glory on High’s already punched my ticket.

So Dizzy here, the idiot friend of alligators everywhere, had his way, which was going forth to Do Good. When he got there that first day, obviously he didn’t know he was going to come across an alligator that had somehow gotten the (rusty) head of an ax, with some of the handle broke off too, wedged in its throat. Which is sad, very sad. I hate the thought of any child of nature — beyond flies, fruit flies, roaches, etc. — suffering a premature death. And certainly at the hand of man, which is what a broken ax represents. Yes, your first instinct would be to Do Good and help when reasonable.

With Dizzy, though, he put his own life on the line to save an alligator. Maybe a fair trade in Dizzy’s case, but not for most of us. Personally, I would’ve called a ranger, who could go and take care of the problem in a professional capacity. But the fact is, even though the ranger would’ve gone out, he would’ve also shot the alligator to put it out of its misery. He wouldn’t have risked his own arm. That’s the way it should be, either that or let the alligator die of natural causes. You’re not helping a bit by disrupting the cycle, although our first thought is how to make it more merciful.

All that isn't the dumbest part. That's another couple months or maybe three months, whatever it was, when Dizzy rushes out to the lake thinking he will have a grand homecoming, just him and the alligator. They’ll get together and frolic in the water, splashing, play-fighting, and will finally end up on a desert island cuddling until midnight, at which time the alligator makes its way back to the swamp, after having conveyed Dizzy across the swamp on its back.

Well, of course the alligator, assuming it was the same one, didn’t recognize Dizzy from Dopey, and … what can you say? … the other rangers had a couple hours paid leave for his funeral, and each got free counseling.
Posted by dbkundalini at 6:00 AM