Tobacco Day In World War I 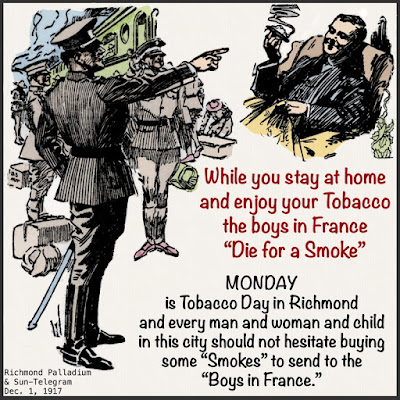 (No kidding, this was in the newspaper during WWI)
Part 31 of 31
They Found Another Body

World War I was a long time ago, and most of us probably don’t remember much about it. Even though I was briefly a history major and took coursework in college that included things about the war, I’ve forgotten most of what I didn’t really know very well at the time. Maybe if I'd heard they had a drive to get more cigarettes to the troops, I would've stuck with it.

The great thing about this public service ad is how much our fellow citizens on the home front — if you’re from America — wanted to support the troops overseas. And what better way to support them than to make sure they weren't lacking for something to smoke! That’s a little different from what our concerns for the troops would be these days. I can't think what we'd send. Bubble gum, adult magazines, what?

But take a look at the old movies, the '70s, '60s, and well before that, and you’ll see everyone was smoking. It was the national pastime. And especially dear to the south, Virginia, which was/is tobacco country, their best known crop. The boys in France were dying for a smoke, a taste of home, the old south, and it's to the south's credit that they came through.

How terrible it’d be for a bunch of them — a battalion — to have the enemy, the Huns at the very door (or on the run) and run out of smokes. What would they do? If they had guns and no smokes, of course they’d be able to do as much as they could with the guns. But how long could they just sit there with a noisy gun jumping all over the place, trying to put up a respectable fight, without smokes? They could only do what they could do and try to better their best, but the disappointment of not having smokes in a dire life or death situation might've been too much.

Then it goes on like that for a while. They're just itching for a cigarette. "This foreign air tastes terrible without something to flavor it. And I was on edge as it was. That last volley of shots came in so close I don't need to shave for a week!" Plus, factor in they've only got a limited resolve and morale. Pretty soon, without smokes their will to live would surely dwindle to nothing. Buddies calling to each other, “Fight, man, fight!” And that rouses them for a while, until, finally, it's all in vain, like if you tried to slap mosquitoes with a limp noodle.

The Huns are coming in for the kill. And without the right tools at hand -- smokes -- that’s exactly what happens. Our guys, without smokes, go down for the final count.
Posted by dbkundalini at 6:00 AM