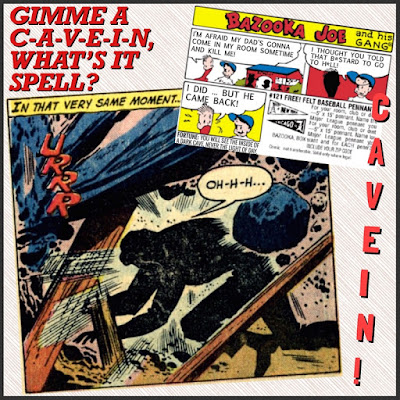 Part 18 of 31
They Found Another Body

FORTUNE: You will see the inside of a dark cave, never the light of day.

Some old friends of mine were once trapped in a cave. It was touch and go, a bad situation. But then -- thanks to it being an episode of The Adventures of Superman (George Reeves) -- Lois, Jimmy, and Clark were all saved. That may have been a happy ending, but I’ve heard of so many cave-ins in my life that I’m more afraid of caves than any other cause of death. And, yes, I know I don’t mention it that often but it's something I’m passionate about. That and the danger of choking on air pollution. Which actually goes along with cave-ins.

A lot of people have been very upset with me on this issue, even demanding that I "stand-down" and give up the microphone when I’ve tried to raise awareness of cave-ins. Which always leads to a lot of foolish mockery of me, mimicking me, the whole babbling thing that enemies do, to the point of them dressing like stereotypical cavemen and speaking in idiotic broken language, "Caves bad, no caves good." I never said that!

It’s good to get that off my chest, although I have no real reason that the anonymous readers I get on the blog will be any more sympathetic than the others. Some of my critics were even so mean as to put signs on my lawn “Caveman Lives Here,” etc., warning others that I might run out and club them to death. This is the biggest reason I don't give out contact information. In retirement I cant afford the security team I'd need to keep protestors from encroaching on my property. And maybe you as an individual are good. It's still a concern. But enough about me.

Can you imagine being in a cave-in? A lot of us don’t have much experience with caves period, so it’s probably not something we worry about. But there have been a lot of people who’ve been through it. My own experience with caves tells me it’s good to be wary, but none of them caved in while I was in them either. The more dangerous caves I've been in, I've kept a wary eye on the hole. And professional caves that are open to the public have to be safe enough for the public, mostly for insurance purposes.

Yet there are indeed caves that are dangerous. If you ever come across a cave, obviously there’s going to be signs that people know about it and that it’s not a new discovery by you. If it were 100% dangerous they’re going to have at least 20% of it tended enough to make it less dangerous, at least for their purposes. But that work may have happened a hundred years ago, meaning what was 20% then might be 2% now. You’d be better off not going into it. Then there’s the problem with turning corners, going in you turned left. Coming back out you might forget where to turn right and end up in a hole.

It’s only in cave stories where caves always collapse. And where there are evildoers trapping people in caves, etc., as is the case here today. To be killed in a cave it’s usually done two ways. 1) Being hit by debris; 2) Running out of air. The graphic portrays sabotage, an actual cave-in at a particular planned moment. Those are done by a person, since ordinary cave-ins never happen on a schedule or the exact time you want. I wouldn't want that as my fortune. Running out of air has to be one of the most terrifying ways to die. Unless you can fall asleep at will and not wake up. At least in drowning death is close to instant, depending how many times you come up for air.
Posted by dbkundalini at 6:00 AM