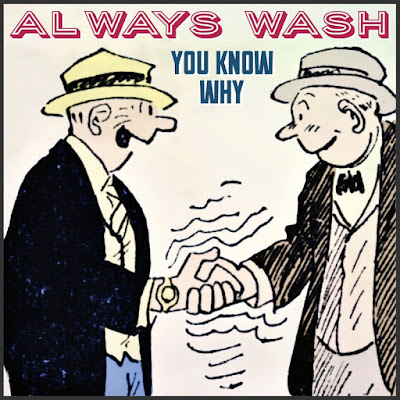 Part 29 of 30
There's Death In Them Thar Drawers

Getting toward the end of this series, I've covered a lot of territory and saved a lot of lives. But I still have a pretty good teaching to touch on, and once I touch it I'll wash my hands. That in fact is what the teaching is, the importance of washing your hands. And I know what you’re saying, “I already wash my hands. I washed my hands a month ago today.” Hmm, think about what you just said. “A month ago today?” Friend, that’s not good enough. It needs to be done more often.

Then you might say, “I’ve already learned my lesson, that there’s death in them thar drawers,” and you're thinking you've followed the chaste path. Again, I need you to think through some of these issues. Consider this, for every guy who’s given up all semblance of sex, there’s gotta be 99 who hasn’t. So say you go out in public, you’re walking in town, that means -- the statistics are through the roof! -- you may as well be walking in a minefield! Just as the exploding mines would practically scare you to death, the overwhelming numbers of the sexually profligate infesting our cities far outweighs your virtue and mine!

I hope I'm getting your attention. You’ve never been a sleepy guy, a dullard, someone without a clue. So please wake up and see -- open your eyes for a glimpse -- everything you touch in society has been touched by 99 of them for every 1 of us. Drinking fountains, door knobs, everything. If you’re willing to drink from a drinking fountain, you may as well be down by the piers welcoming sailors home on your knees! The button’s filthy, the sides are filthy, and the water coming out is moving across the spigot which has germs. Have you ever seen a guy lift a kid up to the fountain? The kid’s mouth encompasses it! Making it bad for the kid and bad for you; I'd rather be thirsty.

My honest counsel for you, once you’ve discovered your brain, is use it, don’t shut it off, don’t neglect your thoughts. They may call it paranoia, which I suppose it is, but it’s reasoned paranoia; I’m not paranoid about scary things that aren’t true or not likely to be true. I’m not worried about washing my hands because I think I'll meet a space alien in the park and don’t want to encumber him/her/it with earth germs. OK? That’s not a reasonable concern. I’m definitely more afraid of the park just for the friends I might meet.

You run into our circle of friends -- and this is true over everyone else’s friends -- those guys are polluted. They’re not likely to survive the day, and if they do, it’s an absolute fluke. Then what they're carrying will be on you, then it'll be on me. Which, excuse me, I need to wash again.
Posted by dbkundalini at 6:00 AM