Death At A Swinging Nightclub 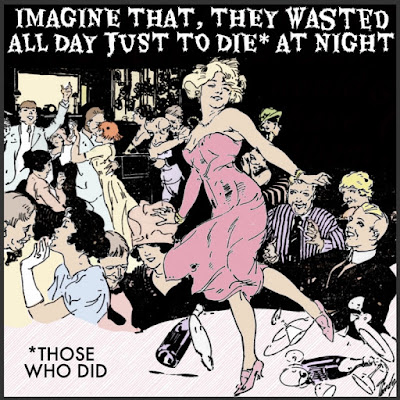 Part 25 of 30
There's Death In Those Thar Drawers

It had been a long time since I was out to a swinging nightclub. As much as you think me the consummate cosmopolitan know-it-all, I’m actually quite inexperienced and innocent. I have a hard time talking about anything but the weather. So I don't try anymore. On any given night, instead, I'll put moisturizing cream on my face and let it cake, then hit the bed, reading some old Reader’s Digest hardbacks my grandparents left me when they passed. I’m definitely not setting the woods on fire, nor do I think it’s even a good idea.

Occasionally, though, I drive by a nightclub and survey the whole thing. It’s been about a year ago that I was so worked up about the obscenity of society and the things people are willing to do -- and they get away with it, too, ‘til they’re caught or diagnosed. I was thinking of this series and thought I should brush up on my outrage at society’s ways. So out I went! Parking behind a dumpster and walking nonchalantly up the sidewalk and around the building. The windows being draped, there was nothing to see, so I had to walk in. Right away the head waiter saw me and came over with a limp dishtowel over his arm and serving tray. He told me a table wouldn’t be available for an hour. I looked over and saw people strung out, entangled, arm in arm, pants strewn about, dresses unzipped, and coffee getting cold.

It might not look like a good idea, but I did have a good idea what was going on. Which can be summed up in one sweeping indictment: There’s death in them thar drawers! His drawers, her drawers, and all the drawers that drew them together and sketched out that bleak picture of lust once strong and now obscured in lifelessness, limpness, letting it all hang out, not presenting a good picture, nothing I’d like to be caught dead at, spread eagle like some or more demurely curled up and hidden under a table. The light’s never that great in those places.

I know what happens at these places, and that death is never far away from the participants. With the saddest commentary on the situation being, there’s always someone else just old enough and unwise enough to boldly take those people’s place when they’ve passed. Sweep ‘em out, call in the shadiest undertaker you can find, let the evidence be obscured, no one has to know, and the show goes on! Put in brighter lights if it helps the bottom line. Put in dimmer lights if the body count’s out of whack. Close the bathrooms for “cleaning” if the johns are piled up with the johns . Sweep the floor, and for most of those men’s rooms, make sure you mop it! Those drawers are a mess, and death has come for “them thar” people whose turn, unfortunately, it was.
Posted by dbkundalini at 6:00 AM