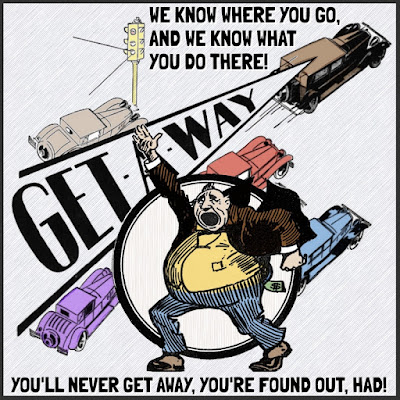 Part 3 of 30
There's Death In Them Thar Drawers


There’s no sadder words in the English language -- and I’ve considered every word associated with grief -- than a muttering, threatening voice on the phone, saying, “We know where you go and we know what you do there…” With a long pause and the inevitable sketching out of the steps you need to take today, next month, the next month, and as long as you're alive. They might relent when you're in the nursing home and have lost your mind, but don't get optimistic.

You flail away, trying your best, “I don’t go anywhere, and I never do anything there, nothing every other guy in town isn’t doing...” It’s a real fear, I’m sure. It's hard to breathe, you wish you’d been a monk all these years. It’s certainly more fulfilling. And you've tasted the cheap thrills and they weren’t fulfilling.

Still, time stops for no man. And the man doesn’t stop either. He runs, it rains, he stumbles, he’s observed in a frantic pickle, there's a pit in his stomach like a peach, his outlook's dim and his eyes blink in the rain, barely seeing. A car honks and splashes water against him, not that he was dry anyway. And pretty soon if he doesn’t play ball they might hang him out to dry.

It’s all so sickening, that cornered feeling that I can only imagine. I’ve actually never been in that pickle, but there’s other times in everyone’s life where you feel like you’re boxed in and full of regrets. Like you didn’t study for the midterm exam and bomb it, knowing what it’s going to mean for the future. Repeating the class a second or third time. Which isn’t as bad as being marked for life because you couldn’t withhold your personal favors or expectation of favors and got sloppy.

But there's good news! The whole thing touches on and fleshes out the premise that "There’s Death in Them Thar Drawers." Life can be very tragic when you’re boxed in, surrounded, and left without hope. Every car whizzing by is the enemy. Because, really, what’s the chance that you’re out there alone if you’ve already heard the threats? The message becomes so terrible and with the terror so clear. You’re never going to get away, never going to escape.

How’s your breathing about now? I bet not so good. It’s making even me sick and I’m 100% innocent. And actually, you know what, with my own problems I might be free and clear. After all, I’ve moved probably six times in the last couple years. The only problem is I didn’t go through the rigamarole it takes to 1) Fake my death; 2) Assume a different identity. 3) Etc., because thanks (no thanks) to computers and everything online, it’s not as easy to do as when we were kids. I disappointed my parents one time and changed my identity and it wasn’t a problem. But that was before computers. Now you’re in big trouble and have to accept it. Those dismal blackmailers are simply the price of living.

Good luck. It's a nice thing to say, so a few compassionate points for me.