Touch & Goo All The Way 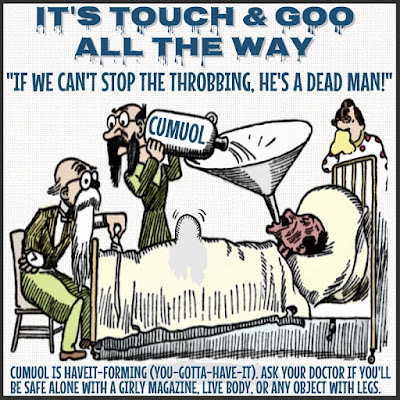 Part 28 of 30
There's Death In Them Thar Drawers

Do you still think there’s nothing to it, that all sex and its related acts and conditions and consequences are safe? And that somehow there’s not death in them thar drawers? And that anything and everything goes, and that all things should be accepted, and that the more the merrier, and that-- and that-- and that? If so, you've got a greater tolerance than I, and how you ever lived this long without being in league with the devil is the question of the hour.

Look at this private doctor's room. I can barely stand to look at the scene without being sick. Honestly, I’m on my third iPad, having destroyed the first two with a sledge hammer, and only hope I'm able to write the next few paragraphs without going into even more debt. I get sick easily, I’ll admit that much, but certain things send me over the edge, not in a good way, and I simply can’t continue. It’s something from childhood. I was 14 and my mom taught me the facts of life because dad worked nights, and her revulsion as to the details was so overwhelming that her shrieking stuck with me. The house was closed by the proper authorities for a month when they mistakenly thought we’d come down with the plague.

I was very impressionable, as you might've guessed. Because the overwhelming irrefutable lesson I took away from every despicable tenant of the teaching was “There’s death in them thar drawers,” whether a long and prolonged passing (footsy, puppy love, winking) or something more immediate and obviously fatal (slow dancing, parking at lover’s lane, traveling salesmen trying to scrub away the taint with stiff brushes and lye*). Those were the years when they definitely knew what death was: World War I, World War II, Korea, Friendship Rings. We lost some of our best people, virtually an entire generation, because there weren’t the safeguards we’ve come to expect now on the boundaries of a healthy friendship.

Even today, not very many guys are aware of how their bodies function. But the actual facts are that too much of anything can shut off this valve and open up these spigots, and it just happens more or less on its own when overdone. You're driving down a smooth blacktop and you're bouncing in the driver's seat. And repeated abuse simply means you're asking for it. Too much of anything has similar consequences. You eat too much pie, you’re mortgaging the house to buy more. You can get hooked on water. And with bottled water so common, I fear for the next generation, drowning, etc. And then there’s sex. Please, proceed with caution and stop before you turn on someone who refuses to be turned off!

Anything that is haveit-forming is obviously without boundaries after a certain time. Like in finances, if you over-extend yourself, you have have years of consequences, troubles with debts. Pretty soon you’re dealing with loan-sharks. Similarly, depending what the act is, you might need expensive medical care. Whereas you could even now, before it’s too late, simply zip your pants and walk away.

*Don't try it, it's deadly as rabies.
Posted by dbkundalini at 6:00 AM