Messing With My Toot Toot 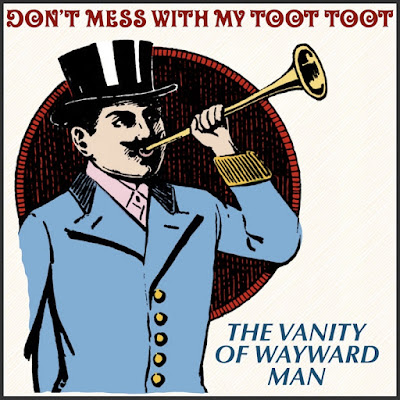 Part 5 of 30
There's Death In Them Thar Drawers

I’m not the kind of guy that likes to give people orders. As an example, “Don’t mess with my toot toot” has been an uncomfortable thing. Even though that’s what I’d secretly have to say, it violates the old adage that you catch more flies with honey than explosives. Honey attracts, explosives repel. So I go to a lot of  extra work -- people assume I have all the time in the world to waste when actually I’m getting fairly old -- of saying such roundabout things as, “Please make every effort to keep your hands and other relevant body parts, stationery or moving appendages, from contact with my sacred toot toot.” As nice as that is, it leads to problems. It sounds negotiable.

But also, just like I said, I’m getting fairly old and now the demand for my toot toot isn't what it was when I was 25 and cute, regardless of how monstrously virile I still am. But privately. It doesn’t bother me so much, a toot toot like this, but I’ve seen other guys -- not as cool and mild-mannered as me -- rubbing theirs, exposing theirs, and thrusting their hips in inappropriate ways and places. Lunch lines, movie lines, church. “Oh, did I bump you? I’ve had vertigo since I turned 90.” Definitely, if you’ve turned 90 and you’re still thrusting your toot toot recklessly enough to bump someone, with the likely shrinkage, it’s probably not vertigo! But if it is, from your point of view, Vive le vertige!

Actually I’m a private guy and realistic. Even if they were lined up around the block to mess with my toot toot, I’d rather they didn’t. I’ve always had that  kind of reticence even when the pickins’ was easy. I'm thankful for a paranoia that’s never left my side for a minute, and if it did I'd be helpless. I remember when I was about 13 and had no idea about anything. Then, like creation out of nothing, everything big-banged into place, a tiny bit of guidance from relatives and friends. I also learned about things that could be wrong physically, diseases. And then quickly sketched out my first insights having to do with "There’s Death in Them Thar Drawers!" It bummed me out at first, but I soon invested heavily in the mission of Health Over Carnality Everytime!