Horndogs In The 'Hood 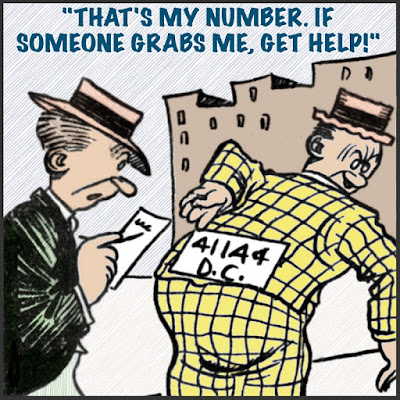 Part 4 of 30
There's Death In Them Thar Drawers

All those years I never thought how useful it’d be if we wore a registration number on backs. Even though we’d been doing it for years on our cars, trucks, campers, and even houses. It’s obvious why we put a number on our vehicles, because it gives the government a good way to make money. And if someone steals your car, it’s helpful to know which one's yours.

We never thought we’d be wearing personal license tags for our personal safety! But with the whole imbalance in the sexually active washouts, diseased to the point of unpleasantness, and those of us who are wisely chaste, we have to be safe. The desperation on the streets is so terrible, any one of us could be kidnapped and made to work as studs. I hate to think of it, since, indeed, there is death in them thar drawers. Right now I’m huddled in an undisclosed location, about six layers of clothes for protection and my own license tag, which I keep with me even at home. Never know when some horndog's going to swoop in and take me.

You really have to admire those brave enough to spend their days on the street. I’m kind of glad they do, because it gives the horndogs someone else to prey on, taking the heat off the rest of us. It could be their chastity is optional, just claimed so they’ll get more action. Whereas my chastity's the old-fashioned kind, again, the six layers of clothes along with chewing garlic in my waking hours. I open my mouth and people fall dead.

The morning is now coming on. The jalopies have ground to a halt. There’s bodies piled up in the yard. The horndogs have apparently died of some fast-acting sexually transmitted disease. I might need to hold my breath when I go out to get the paper. Neighbors who’ve been had are crawling up the street shouting, “Unclean.” I’d love to help, but unfortunately they’re not wearing a registration number. Which is actually fortunate for me, since I have other things to do, read the paper, have breakfast, burn about 90 bodies from yesterday, and just relax and enjoy the day.
Posted by dbkundalini at 6:00 AM