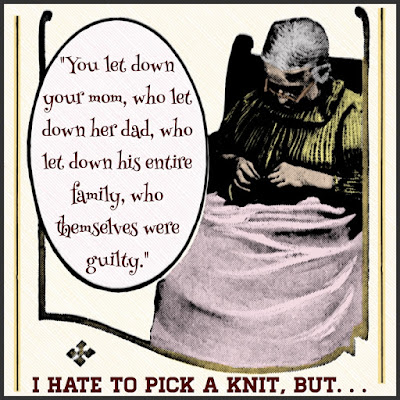 Part 21 of 30
There's Death In Them Thar Drawers

It’s unfortunate that we haven’t found a way to bring more people onboard without succumbing to the ways of the flesh. Cloning has limited value because of the randomness of the families they draw. So there's still a ways to go. Seeming to reinforce the old adage, “Damned if you do, damned if you don’t, six of damned one, half a dozen of damned other.” We're stymied, because we want friends and family and they have to come from somewhere. Yet we know there’s death in them thar drawers, and it'd be great to be principled and consistent in our convictions.

The fact is very few of us are as good as we want to be. Even a sweetheart like Grandma and every traditional grandma I’ve ever heard of. There’s a whole new breed of grandmas, consisting of younger ladies. I question their legitimacy. But getting back to our traditional grandmas, I believe they came by their children as a necessity, mostly to repopulate the farms when the other farm hands were away at war.

So there’s some circumstances where sex has a positive side, very rarely. If your goal is something righteous -- repopulating the farm -- it appears to put aside some of the pain and guilt, the death in them thar drawers. But there's always a terrible nagging sense that you’ve let someone down. Which was clearly painful for Grandma, always torn by the issue. One side of her loved us dearly, and the other, naturally, resented bitterly our very birth; I for one never aspired to be a farm hand, so that was another mark against me.

Thankfully, she kept a lot of her bitterness to herself. In a passive-aggressive way she went about her sewing, her legs demurely covered with a blanket for warmth. It also helped her fight any natural aggression against us before we learned the rules of a decent society in regards to nature’s so-called “ways.” They drilled it into me, and I’ve never forgotten the lessons. I can still recite it: “Sex makes farm hands in case of war!” Which was strangely contradicted by the fact that we had lots of other people around. Cousins, aunts, grandpas, in addition to the dominant class of society, far and away the majority of the population, unemployed farm hands. Frankly, we could use a good old-fashioned war to use up some of them!

I myself vow to keep my chastity. With Grandma long gone now, it's less an issue to her here on earth, but I know somewhere up there she’s looking down, and I fear to let her down by foolishly siring a few unemployed farm hands of my own. So far, then, there’s no death in mine har drawers, unlike the drawers of others in which thar is lots of death in them.
Posted by dbkundalini at 6:00 AM