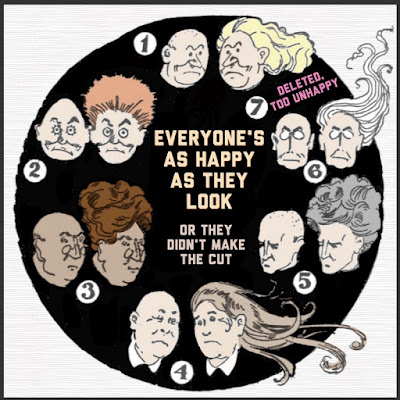 Part 22 of 30
There's Death In Them Thar Drawers

I put out a casting call for models for this graphic -- and I don't put out very often -- wanting only the happiest couples to apply. And I sort of got the happiest couples, but it’s in this sense, they were the happiest I could find. Next, my goal was to get the honest pictures of them down. And some of them need about a hundred shots and this is the best I got. Some of these almost didn’t make the cut, but I had to have something, with the money I forked out (1), and my deadline looming for the blog.

To make an example of them, I deleted couple 7. In complete fairness, they didn’t look much worse than the others, but I was so upset and had to make an example of someone. For one, the man didn’t like me and I didn’t like him. Also, the woman rolled her eyes once too often, they argued between takes, and they threatened to “walk out that door,” so finally I physically kicked the woman out, and with the good help of Garfunkel from couple 5, we had 7’s man’s arm behind his back, with him crying “Uncle! in a very nasty way. I kicked him unceremoniously out of the room, and I believe he fell down the elevator shaft because the elevator's out for repair.

Note, though, what all I went through and how hard it is to find genuinely happy people. I even kept telling myself, the world’s literally full of halfwits, you’d think they'd be happy, a big stupid grin on their face all the time, oblivious to what people with functioning brains are dealing with, money issues, health issues, avoidance of sex, which is usually followed by another round of money issues.

I remember Garfunkel’s partner melodically ruminated on the faces of people, which is a real coincidence, because the man from No. 3 actually is a spy. He looked at me with a quizzical look on his face, that look of “I think I know you.” I recognized him right away but didn’t show any sign of it. I tried to avoid him as best I could and certainly the wife. One affirmation that we’d met before and it’d blow up in my face. I’ve been chaste a long time, friends, and I’m not going back. Certainly not by the tug of an unclean passing friendship (not even that!), which may have seemed like the top of the world long ago but now it’s only sordid, tawdry. I was happy when he left.

It definitely made me think again of my mantra, and I frankly repeated it a dozen times (mentally and under my breath), “There’s death in them thar drawers...” Yes, he’s aged nicely. And I’m not doing terribly myself. Avoidance, chastity, washing my hands, eating the the dullest, drabbest vegetables I can find, it all helps.

Anyway, I kept a smile on my face most of the time with these dear souls -- mostly lost souls -- knowing I definitely had it over them with my personal progress, and that’s what's important. Everyone else may be hopelessly lost in them thar drawers, but at least I’m safe.
Posted by dbkundalini at 6:00 AM