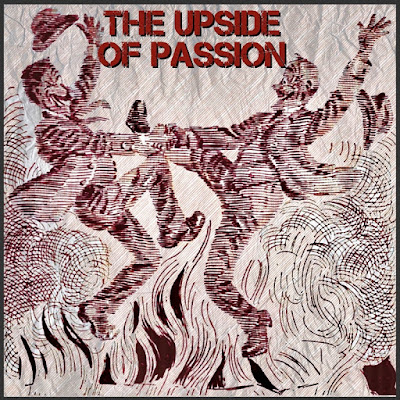 Part 13 of 30
There's Death In Them Thar Drawers

Now there’s a ripping hot scene I can identify with, scorching, scalding, a nice flicker of red flames and a lot of dancing, like the Old West when a particularly phallic-suggestive cowboy gets you dancing to a banging gun -- dance or die -- topped off, in spite of your dancing, by one of the worst deaths, immolation.

A scene like that -- are you with me, brothers in arm? -- has to put you in mind of fairly common experiences over the years. Burning with lust, burning with passion, red hot afire in the loins, the flicker of flames kissing, licking everything in sight. I really see it here, with a lot of basic whooping and shared glee, outright happiness with clasping hands, tossed hats, and getting that big look of wild contentment and celebration of the moment. And to think they each have a wife sitting at home, by now in full mudpack to the hairline, hair in curlers and checking her watch: “Where's that son of a bitch!? Why’s he so late!? If that scoundrel comes in smelling like the campfire with char on his shoes, I’ll know why!”

But I don’t actually say any of this to celebrate this kind of wanton behavior. Because now I already know how crazy it is. Pairing off with his buddy and jumping the flames of passion with a hotfoot isn’t where either of them should be. Because, 1) There’s death in them thar drawers, which should go without saying; 2) That ball and chain with the rolling pin waiting at the door, each one made vows to his respective ball and chain, and there’s more honor and value in keeping those vows than can be found in all the campfires and all the burning with lust and passion get-togethers and frolics you can find, even with male friends.

The upside of passion, though, is something to touch on. That there even IS an upside might come as news to you, because we’re so used to being out there, and everyone leaping about, then the massive communal ‘ending’ to it, and everyone slinks off feeling a little guilty to their respective mudpacks. So let’s touch on the downside. The downside is that you need this upside. Instead of finding the contentment within. Some guys find it, some don’t. Or they find it when it’s easier to find, when they’re too old to cut the mustard. Then they just morph into it and live happily ever after, assuming the death in them thar drawers didn't take them prematurely from the world.

I think the real joy of the thing is when you’re able to set it down at the height of your powers. Because upside and downside leads to no side. It’s simply a negation, not that hard to shun, swear off of, dispose of, relegate to the trash heap of other experiences with friends, and finally surpass. You see your old buddy in a meeting somewhere, you’re strangers when you meet! Or, who knows what, you fall back into the same trap. He asks “How they hangin’?” And one thing leads to another…

Remember, stop! Because for sure there is death in them thar drawers!
Posted by dbkundalini at 6:00 AM