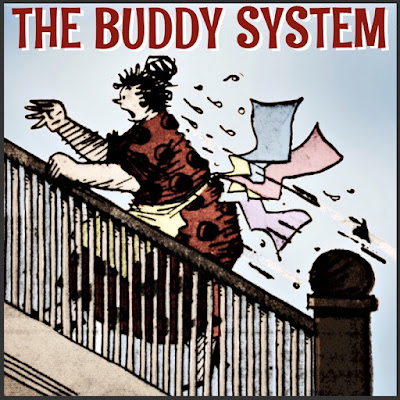 Part 20 of 30
There's Death In Them Thar Drawers

A hundred and some years ago society was a lot different. The roles of women and men were different, but the basic nature of what they did, functioning for reproduction as the obvious example being pretty much the same. The stork had been replaced and that was final. I'll try not to be sociological because it'd bore us all. Suffice to say, they were "getting it on" in ways that would still be a turn-on to us, depending which parts of the act they minimized (billing and cooing) and which parts they went fuller force on (getting down).

You probably know that birth control was more rudimentary, consisting of prophylactics and willpower. If you’ve ever checked out your family tree and find that it had many more limbs -- households with 12-15 kids ranging from newborn to college-aged -- that’s why. The old man, if they were in a town to small or uptight to stock proper protection in the general store, was left with his willpower. Which may have been enhanced, to give credit where credit is due, by five or six kids under seven bawling their heads off while he tried to concentrate.

Without getting too graphic about the other solutions, let’s just throw this out there in the nicest way I can. Say it was mid-afternoon and the old man and the old lady were preparing a nice time later that night -- once most of the kids were asleep and only the newest newborns were squalling -- he might choose to take the edge off, blow a little premature steam, allowing him to embark upon a later excursion in which they could patiently enjoy the extent of it, being longer. He wouldn’t be as red in the face, his eyes would not be rolled as far back in his head, he’d be present in the moment for the moment itself. And she with corollary feelings, coordinated in such a way to meet him halfway, wherever it led.

Naturally the buddy system would be a thing in this, maybe a little assistance, clearing some of the crying newborns out of the master bedroom, taking them down the hall with the older newborns, giving him time and psycho-physical space to stretch forth and allow the plumbing -- the system of pipes and tubes and sac containers -- a wider berth for its natural exertions. It’s a good lady -- dear Mama -- who can understand and perhaps pitch in when the going gets tough. Little Petey down the hall bawling his eyes red, a fever pitch, would be such a situation.

“Your love buddy’s on her way,” Mama might call out to Dad, “Keep up that head of steam, dearest, and know I’m near!” Then she gives the baby a little more care.

[This post is not meant to give the readers any ideas that sexual things are normal or allowed today, especially if you aren’t married with those years of experience in how a relationship should function. Any encroachment prematurely on these sacred implements and sanctuaries -- and that includes even thinking of it -- is liable to raise up nature’s own judgment, death and/or deformity and/or disease, for, yes, there’s death in them thar drawers!]
Posted by dbkundalini at 6:00 AM