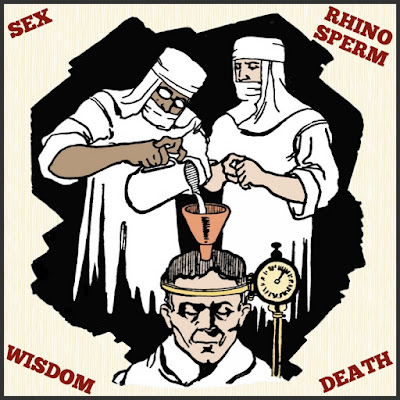 Part 10 of 30
There's Death In Them Thar Drawers

I know I’ve been hard on sex all month, and that’s a good way to be, seeing there’s so many moving parts and so many things that could go wrong. Exacerbated by people’s sense of urgency to “get it on,” often regardless whether they’re fit candidates for the deed, some diseases spread on contact. Others are merely iffy but still dangerous, while others, like me, are disease-free but thoroughly skeptical of everyone else. You take the healthy out of the overall pool, you're left with a cesspool, naturally with death in them thar drawers.

Here’s where science could make a positive difference, and I’m sure sexual scientists are always busy with one thing or another. Some are chemists in the perfume industry, coming up with scents, fragrances, creams and so forth, to stir interest and get us to overcome our natural reticence. Other chemists could be associated with sociologists/investors, stirring up wanton desires merely to fill motel chains. Then there’s all the associated restaurants, gas stations, the fly-by-night marriage industry, etc., more or less parasites. The way I see it, everyone’s on the take.

Still, for the most part -- despite the poor track record of science in a few sectors -- our assumption is that it makes a difference for good. From which I also could hope to profit, merely from the many ideas I've had in this blog series. They could work with my reticence and help tailor solutions, knowing if they could satisfy me with their progress, it’d have to be progress indeed! And really I wouldn’t be that hard to please, as long as others were the guinea pigs when it came to testing. I’d actually be happy behind a control window, fidgeting with dials and experimenting independently with combinations. My whims are often just as good as decisions based on scientific principles.

My teachings about "Death in Them Thar Drawers" have already exploded in popularity. People are asking me, "Is the Horn-Borg near? Is the anti-Horn-Borg serum close?" I got in on the ground-floor of that, the head honcho being a guy at my church. Then he partnered with rhino farmers, scientists, and me as the propaganda guy -- preaching "Them Thar Drawers’ for three weeks, which helped empty pharmacy shelves for three straight days, guys hoarding the stuff, etc., making me the guy filthy rich. He's so rich he hasn't answered my calls for the last two days.

Meanwhile, back in the lab: The technicians are regulating temperatures, which have to be just right. Say it’s a nice 89 degrees, they then procure all the containers needed to hold the stuff. It's a precision-tuned operation with three basic demands: temperature, temperature, temperature. A mutual friend of mine and the conglomerate, who needed a job, watches the gauges 24-hours-a-day. It's a deal with multiple good benefits, not just for a world looking to get it on in a good-natured way but for the my home community when associated family friends calls on merchants to pump the money back into the economy

Everyone loves sex, everyone hates death. The combination of the two in the Horn-Borg Affair is already a major part of my teachings. I throw in a little Freud, enough to flavor it, and people are throwing their money away, giving themselves up to looseness, simply because they think there’s some psychological justification for it. They're also making money with the skeptical, principally through my “Death in Them Thar Drawers” teachings.

I'll be downtown with placards tomorrow morning; if your car's outfitted with a horn, give me a toot! Then there's mothers who are socking it to the local PTAs based on my warnings. But, alas, with the younger generation resenting their mothers and digging in deeper, the Horn-Borgs could make a resurgence. But they don't yet show up on the newer census forms, if we can trust their answers: "Check your personal identification: A) Human Being; B) Horn-Borg."

The new perfect world is dawning, its light.
Posted by dbkundalini at 6:00 AM