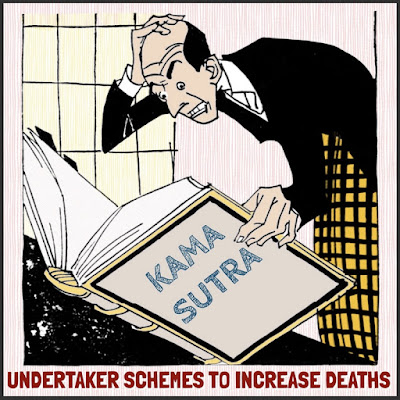 Part 23 of 30
There's Death In Them Thar Drawers

Maybe I should have been an undertaker, known these days as a funeral director. I’m certainly interested enough in it, actually to the point of fascination. I have indeed hung out with a lot of undertakers, breathing in the whole vibe they enjoy, their environment, and their faux sadness and sorrow, all so very superficial, I can definitely say from my in with them.

Which of course is easy enough to understand. They’re not mourners by nature but really technicians, and that includes the time they’ve put on their public display of stolid silence and grief. They’ll be patting someone on the shoulder in rarefied solidarity of grief one minute, then step behind the curtain and flip out the cards the next for a fun game of Pitch. Do they even care? I think they do, but like most technicians they’re personally detached except for doing what it takes to oil or grease the skids to make it through the rest of the proceedings and keep themselves beyond reproach.

I’m not quite as slick as they are, but I'm close to pretty much the same. Making me the perfect candidate to be an undertaker, except I wasn’t interested in it when I was casting about for an occupation that didn’t involve hamburgers. Now I look back and obviously say, Yes, I could’ve gotten in on the ground floor as an assistant to some creepy old man. I would've watched him, observed and emulated him. All the while spiking his beloved coffee with an occasional drop of formaldehyde. Until it was me who at long last was calling the shots, slicing, dicing, then becoming society’s last pillar between the average citizen and their imminent death.

But, alas, when push came to shove, I didn’t think of it. Instead I went the full burger route, till I graduated to delivering pizzas, and wound up my career loading dishwashers, a burying not of men, women, boys, and girls, but food waste, separating meat from the bone, disposing of half-chewed gristle, etc., the same kind of thing without the social perks. I could've made a lot of money. And done it looking so glum, so sad, like society's firm foundation when life gives way in every living creature. With the whole parlor overtaken with pallor and I’m the pal or best friend for the bereaved who may not believe, despite our common mortality, that it’s happened to them.

Then you have the economy of the whole thing. And the unpleasant fact that with modern medicine people can deprive the undertaker another day, week, year, or decade. Not good. We need to get out our Kama Sutras and realize there’s death in them thar drawers, and get people wantonly doing the deed with insistence, like they expect something from it, like it’s going to do some good this time, like it’s going to take hold and yield a blessed event. Which can be taken either way, the blessed event of a baby or the blessed event of someone saying bye-bye. For some folks, that’s also good news.
Posted by dbkundalini at 6:00 AM