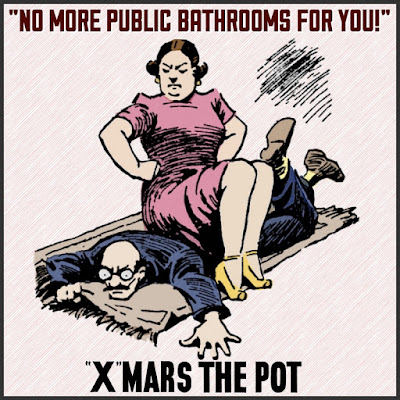 That’s a pretty good kink right there, a big strong woman sitting on our hero, a scrawny helpless dude looking disconcerted, with her strong display in a sweet pink dress, delightful gold high heels, tough-guy arms, and look of revulsion that’s downright nassssty. We could stop right there and say it’s goooood, but I implore you to look away, walk away, because it’s true of this chick as much as it’s true of anyone, There’s Death In Them Thar Drawers!

And how about her quote, "No more public bathrooms for you!" Comes across as a sweet deal. Punishment and denial, her edict reinforced with her soft, fulsome tush. No deal’s quite as sweet as that, those strong thighs, the aforementioned fulsome tush, and that (playful?) look of probably unfeigned disdain. If her face freezes that way she'll mercilessly flay you alive, crush and beat you to a pulp. Death indeed is in her whole demeanor, the drawers and everything she’s got going on, top to bottom, she's mean, very mean, but we still hope somewhat playful. But maybe not ... what a way to die.

And the guy -- a very bad boy -- obviously deserves the worse she can dish out. He’s done something that, at least in my mind is unforgivable, although I’ve heard of guys -- idiots -- doing it, which has to do with public bathrooms. Pardon me while I get sick! To me nothing's more unappealing than to be pealing off your clothes or someone else’s in a public bathroom. And I’m not faking here, not trying to be difficult in order to to spark a kink of my own. Because it’s not there, just the truest, strictest revulsion, which I will loudly proclaim and never withdraw! This is a point I make, a point I insist on, Katie Bar the Door, Goodnight Miss Unabashed Wherever You Are. Six of one, half dozen of another, red 30, 5 aces, I just dealt and drew a straight roulette!

It takes love in my opinion to even care about the bespectacled frowning idiot at this point. And he’s not my type. Frankly I wouldn’t give him another chance. It’s unforgivable. He’s on his own. “X” marks the spot, sex mars the pot, for sure, if I were his partner this would be his last bit of overreach, say he reached in and dangled it over the public pot, a flow’er or one already empty. Spent.

On the other hand we could’ve come to the scene just a little bit late, without the information required that would’ve set us straight. Whereby if it is simply kink, a playacting game that lovers do -- her and him -- with no reality behind it, then I believe we’d still be cooking with gas. It’s kosher that way, but no sir to the other. Keep it light, keep it imaginary, and I’m in or on, whichever would be most appropriate. At the first sight of reality, however, it’s hands off, you’re on your own, don’t call, don’t write, I wouldn’t touch the paper you wrote it on anyway. In times like those, yes, There is death in them thar drawers, ‘nough said!
Posted by dbkundalini at 6:00 AM