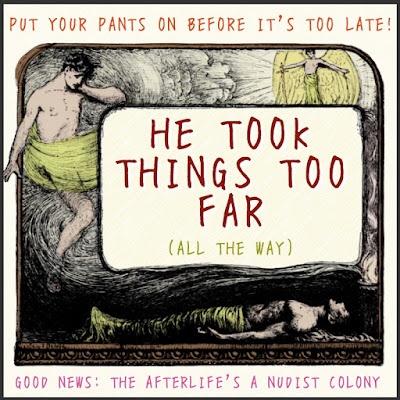 Part 17 of 30
There's Death In Them Thar Drawers

This is a true story -- it is truly a story -- of a guy I once knew. Many of the details are fiction or close to fiction to drive home various points. Plus, I’m trying not to be so explicitly accurate that he thinks he's entitled to compensation, and of course I don't want him suing me for damages.

That's the way stories go, too. They’re either so boring you can’t do much with it. Or so interesting that they want a piece of the action. To which I say, if they wanted a piece of the action they should’ve stayed in the relationship, freely letting it all hang out and getting it on, instead of demurely withdrawing and then bragging to me about their experiences sexually and now with their abstinence, as though I haven’t got enough problems of my own. If it makes you feel good, take the whole thing with a grain of salt. And if it does you any good, that’s my joy.

Anyway, my friend’s experiences, the sex stuff, was so foolhardy, so completely demented, and for a guy with a high denial IQ so lascivious, that he literally died from pleasure (1) mixed with (2) the diseases attendant on certain unapproved, unwise practices. To get any more explicit than that would make me physically ill, and I’ve already had the dry heaves three times just with the intro.

But to literally die, that does something to me, going really the whole gamut, from physical sickness to spiritual euphoria. It’s either completely true about the afterlife (which is what I hope for) or the disease he contracted gives that illusion (six of one, half dozen of another). The last time I checked on the guy, and I occasionally see him at the pharmacy getting his various pills, he was still having all the symptoms, afterlife tales and the more cautionary stuff of back alleys. Still chasing that high and that low.

What would that be like? I often wonder, to be supine in the tomb, then to be ascending to heaven? All because you’re too much a horn-dog to forego a little bit of pleasure? One thing’s for sure, with my fear (which is my native saving grace), I’ll never know, unless it hits me the way I hope it hits me, when I die. The sensation of alpha jerk that Hendrix may have had. (Google “alpha jerk” and you’ll see the link.) In short, there’s two sockets/holes, death and life. In the experience of being there, in this surmise of Hendrix, he may have said, “I wonder if I can die.” So he supposedly tried it, the alpha jerk came on him and he 'slipped on out.'

My friend has apparently already been to the afterlife, but he keeps coming back, getting it on with various people, and maybe catching another virus or disease and going to the grave, over and over, world without end. Someday I’ll tell him goodbye and that’ll be it. But I’ll never know it’s it till he quits coming back. And if he keeps coming back I'll have to reassess.