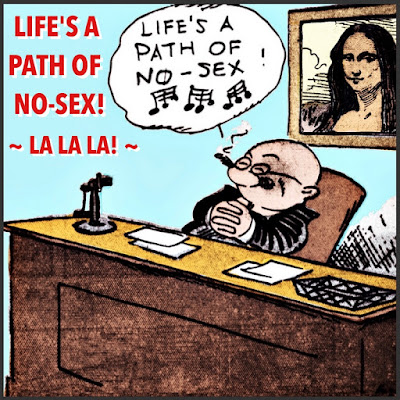 Part 27 of 30
There's Death In Them Thar Drawers

Welcome to my office, the inner precincts previously never broached by visitors or curiosity-seekers, till today. And really I’m kind of proud to be welcoming people in for the first time, except for the cleaning lady; she’s been here before. Naturally, I’ve been well-behaved around her, although like everyone, I hear stories of other bosses, bold to say the least. That doesn’t go on here.

Which you can thank my vows of chastity for, since keeping vows to me is just as natural as breathing, actually more wholesome than breathing, since breathing, like sex, is just a lot of in and out, over and over, in and out. The only time you’re chaste breathing is at that tiny pause between the two. Which if I’m not wrong, is mentioned in Asian spirituality, like the Tao Te Ching, a sometimes go-to crutch I’ve consulted over the years, truth that keeps me limping along limply, contentedly.

And not to put too-fine a point on it, but would you rather be limply or empty? Think about it. One is a state of being, the other the end of a process. A state of being, you can merely be in that state, zoned in, zoned out. The whole thing of emptying is a process, and as processes go, it's quite the taskmaster. These are some of the thoughts I have in my desk. Notice I keep my desk pressed up against the wall, taking away space for chasing the cleaning lady or her chasing me. And you see my hands are on the desk, making them otherwise occupied.

The only sexual object I’m allowing is a new addition to the office castle, a gorgeous likeness of the sexiest woman alive, Mona Lisa. You might guess what I had there before, a still-life of a potted plant, and not even that colorful a flower, always worried as I was in those days of temptation. Say it were a red rose; it’d only give me thoughts of a lady called Ramblin’ Rose, and the nights we’d be ramblin’ out for tea, perhaps stronger drinks, then her place, my place, or maybe back to the office to be chased around the desk. And there’s death in them thar drawers...

Mona Lisa actually does me a lot more good. It stands to reason: Leonardo da Vinci painted the original -- what? 5 or 600 years ago? -- no doubt she's gone on to her heavenly reward. To me she's a calming influence. Anytime I get the least bit randy, say I'm performing the Heimlich Maneuver on a choking waitress, I return to the office and take a look at Mona Lisa, dead and decayed, a study in the some somber browns, her smile barely there. Makes me think of my own grandmother, also passed.

Yes, for me, (singing a little), “Life’s a wonderful path of no-sex no-sex no-sex, all the live-long day!”
Posted by dbkundalini at 6:00 AM