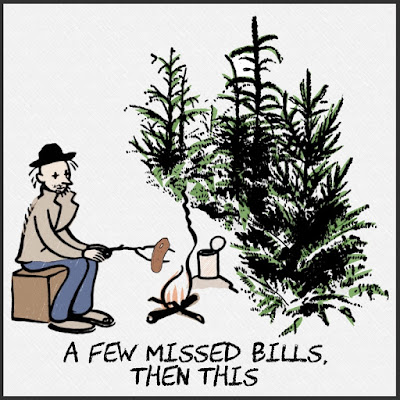 You’d be suffering extensive, great, and persistent paranoia, too, if it cycled through your mind day and night, everyday, how things could still work out for you. I don’t know if I’ve ever felt 100% secure, but these days are ridiculous. It bounces up once in a while, but it always nosedives a little, with a strange nosedive that levels out before the final disaster, as though they're toying with me, stringing me along, never allowing me to get a firm grip on security and yet allowing me to keep enough hope and success so hitting rock bottom is that much more painful.

Naturally, winter’s the toughest time of year for picturing in your mind what could happen. I’ve been staying in my own place -- things aren’t terrible -- but any one of many different scenarios could burst on the scene. I’ve known guys better off who’ve had it all yanked away from them. They were foolish. They thought they had security, but I'd have the whole experience, security gone, knowing the depths a guy can sink. And it doesn’t necessarily get better. There’s no rule that things have to get better.

Let me tell you this, too, I have responsibilities, number one being my dog. She’s never been in the lap of luxury, but she’s never been hungry either. The day I took my dog from her mother’s teat, I promised her, “Underbrush, you’ll be all right with me. Put 'er there, pal,” and we shook on it. Which is a great trick she taught me, since I’ve long had a fear of touching animals or people. It goes back a long way, when I heard you could catch germs from everyone. Changing me from the gladhandiest kid to being completely mentally stoved up adult, tight as a tick. The dog also loosened me up quite a bit on that front, presenting her papers proving she’s had the next 50 years worth of shots.

Of course there’s no explanation other creatures really understand -- I barely understand it -- about money and being hard up. How can we be the so-called crown of creation, creatures of intelligence and sense -- and allow ourselves such a worrisome frame of mind, cutting off the legs of one another, our fellow citizens, our brothers and sisters. The country brags about what a great country it is, while half of us goes to bed nervous, teeth-chattering, having nightmares about our shots? Could their dog eat them tomorrow?

There’s a grove of trees up the street, I’ve mentioned it before, when some homeless folks were living there. Then they came and drove them off and put up a sign: “This property is monitored by satellites in space.” You see that and think, “This little two-bit sliver of land has its own satellite eye in the sky?!!” I laughed at first, then thought, “Where would I go to escape the satellites? I need a decent night's sleep...”
Posted by dbkundalini at 6:00 AM