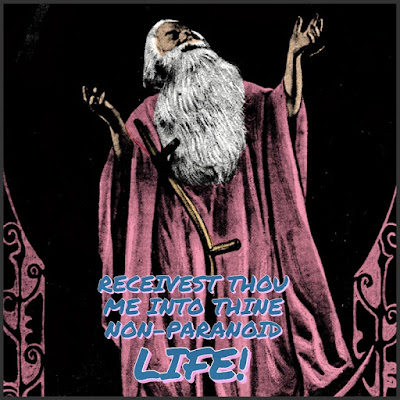 The last post on paranoia. I probably should just leave well enough alone and keep my mouth shut. Call it off. But I’ve already said enough for my enemies to hang me “by the neck until I’m dead,” and nothing else I say now will likely make it any worse. But, seriously, it could be that they’ve missed everything so far -- a problem with the internet -- and just happened to tune in for this last post.

I can well imagine what they’re saying, “What have we here?” Then add to that a sprig of malevolence and their attitude takes a decidedly negative turn, “What else do we have here? Hmm, he lives in The Big City, that’s where we live… What if we were to squat in his backyard, put up a tent and pretend to be just guys from the neighborhood. Then spy on his comings and goings to the point of accumulating enough intelligence to blackmail him for the rest of his life!” Oh, no! Spare me from that. There’s other guys somewhere like me, and they're meatier by far, more meat to the bone for you to feast on, and younger too, all of them much younger. You’d have a whole century to torture them. While leaving me to an early death. And currently it's 9:46 a.m.

Anyway, that’s all a bridge too far for me to take, and this being the last post, a bridge too late to worry about. As soon as I hit the last button, I won’t be home for a day or so. Not just to let the place cool down, but to watch out for the guy I just pictured. The way imagination works, it’s exactly like that, you imagine it, then it comes true in some sense, and often times worse than you banked on. Putting me in an unenviable position, everyone will agree. And hashing it over doesn’t do any good, in fact just makes it worse.

That’ll be my resolution, even though it’s not New Year. Anything that might be made worse by my focusing on it in a paranoid way, I have to avoid. The way I’ll do it -- I hope -- is the first threat I see, after seeing that it’s not an active threat but a possible future threat just waiting to be manifested -- is not dwell on it. Let it pass. I’ve heard of letting things pass. I’ll work on letting it pass. Don’t make it a concrete threat by writing about it, don’t even take notes on the subject. It can only lead to a worse outcome. Instead, here’s something to try, close your eyes, take a deep breath and let it slowly leave you by a prolonged thoughtless exhalation, and say, “Whatever it was I was just thinking, let it pass with this breath.”

Think that’d work? I don’t either. Because in not making it a concrete threat, now it’s nothing but concrete, a hard thing to avoid. I’ll be checking, checking, checking on it. Did it pass? Is it right here right now? Is it in my head? Is it real? That throbbing of that vein by my ear! That wasn’t there yesterday! Did someone slip me a micky? I never drink in public for that very reason. It could’ve been done at the source, the water pipes leading into the house. So they must be watching, they are! If I step out of this house, I’m a goner. I’ll just take a minute and think it over.
Posted by dbkundalini at 6:00 AM