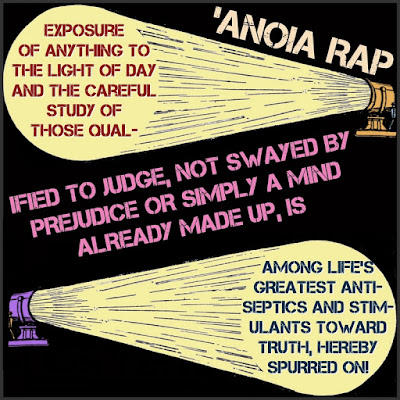 Please forgive a little diversion into my debate notes from 7th grade. They gave us our assignment and we went off to do the research. Then the third day of class I was the debate foreman for the affirmative of this proposition: "Exposure of anything to the light of day and the careful study of those qualified to judge, not swayed by prejudice or simply a mind already made up, is among life's greatest antiseptics and stimulants toward truth, hereby spurred on." I'll never forget it. We wiped out the other team, and to this day the question to me is irrefutable. It was such a moment, really, and everyone was so blown away that we spent the rest of the semester arguing about the merits of particular baked goods. And brownies won!

Along those same lines, I used to hear the great beloved song, “Count Your Blessings,:which was a decent song that also had a lot to do with your attitude. Because no matter how bad things are -- there are always great antiseptics and stimulants, and, yes, you can accomplish anything, and that's the truth! But enough about debate, now to real life...

The setting here is a town dump, which allowed public access. And our parents didn't care if we played there, killing rats, blowing up aerosol cans, anything. It was great. Among the personnel there, let’s see, Edgar was the first manager, then a guy named Stubby took over, then a guy named Harmon. That’s when I left home. Anyway, we did go to the dump to play, shoot rats with bows and arrows and watch them bleed and seek out the quarters where the poorer rats go, their holes.

I suppose some of my bad luck is karma from those days, because I couldn’t stifle my killer instincts, thinking it was so fun. I caught a piece of the karma even as a kid, cutting myself on a tin can and needing shots. Mom asked WTF happened, and what could I say but the truth? We were throwing bricks through old TVs and watching them explode. But I was too close to this one -- a Philco -- and the blast carried me 40 feet through the air. Quite a flight, too. Half hour later I landed in some rubbish and sliced my finger pretty bad. I went through the rubbish and found an old chunk of cotton, a little sticky with something, and bandaged it good enough to survive the walk home. And so forth, I threw myself on Mom's mercy, she sewed it up, and I went to bed and had dreams and nightmares, most of them in quick succession, some of them on a seemingly endless hold while they threaded the projector, a type you couldn’t get parts for today.

So what happened next? I can’t remember what just happened! Ever since that time, my memory has been very faulty. I’m hoping to find the cure someday but have had great difficulty … My memory’s so bad … I have vast experience with paranoia ... I hope they can cure me. Something happened. Whatever it was is, what was it I said? Anyway, I believe there’s a whole slate of enemies, see? Out to get me, see? My life was essentially ruined, somehow. People from the old days who see me also wonder what happened. I’m always like, “What are you talking about? Nothing happened to me.” Then I fall asleep and wake up crying out. It’s a bastard. Whatever I said. Somethings out there, just biding its time, somewhere nearby, waiting to get me.

They took me to a doctor. His favorite word was “Interesting.” He'd put the listening thing up to my chest and say “interesting,” and so forth. I just lost my train of thought again. And this might be too much a downer. I’m fearful it is. It really gets to me. Look at my hand, that’s some shaking, huh?

Really, though, that’s nothing. I could shake it twice as fast if I needed to, and I just might...
Posted by dbkundalini at 6:00 AM