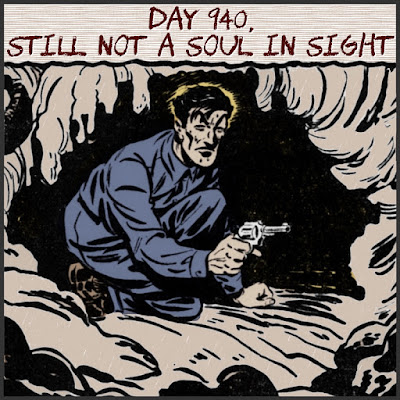 I don’t actually have a gun -- no guns at all -- but I probably should have. Packing heat could very well come in handy. I can certainly imagine all the scenarios, like hiding away in a cave for 940 days and it'd be tough without a gun. If nothing else, you could shoot fruit from a tree and with it bring into your precious system the building blocks of nutrition. Anything that helps me stagger across the finish line of Day 941 would be good, probably, although at some point I could start wondering what the point is. Then it becomes dangerous.

I’ll tell you right now, I’ve thought of this before, because I’ve been in a cave: A cave is a great natural shelter, meaning, Other animals have noticed the same thing. And if I’m in a cave very long, it won’t be long till the animals and their families start showing up for the night. Meaning, a cave is a terrible place to live unless you have some way of securing it (1), and some way of (2) of stilling your conscience about the idea of displacing animals. I don’t think I could do it. I’ve camped before, then the paranoia of animals becomes too much.

I was talking with a guy a couple years ago -- homeless dude, but the county gave him a tent and let him stay at the state park without paying -- who totally turned me off to the idea of camping, roughing it in the wild. He told me about raccoons continually tearing through the sides of his tent, looking for food or whatever. He said they have razor-sharp teeth and claws like a bear. He was on his third free tent, which started to sound to me more like a way for the county to kill off the riff-raff and blame it on raccoons!

At that time I was living in a camper and I was paranoid enough about a camper. The wind rocks it. You hear rain like metal pellets. The furnace is hard to turn off. There’s no easy access points to it if you had to do emergency maintenance. Half your stuff’s outside, a easy mark for predators, including other people. But I considered myself lucky because another guy had an animal trailer he lived in. Which looked very cramped. He and I never spoke. I wasn't sure about him. Probably had seen a lot of stuff in his life.

Then there’s the mosquitoes, and ticks, and every godforsaken creature of the night, mostly raccoons clawing at that guy’s place. Which is actually only one step up from a cave -- because no creature of the wild has ever missed an entire cave. A cave wouldn't be good enough for me. They'd storm it and drive me out with fire.
Posted by dbkundalini at 6:00 AM