The Terror of Meeting People 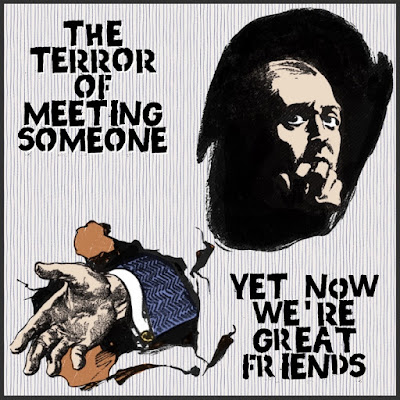 You know me, Mr. Social, yes, perhaps a little paranoid. But I also know you. And skittish isn't the right word. More like damaged. But in your favor, you're always optimistic that you can do better and make progress. I pray for you daily, "Lord, take away his crippling skittishness, but -- high five -- Thy will be done." So you're you and I'm me. And I'm pretty close to being right in my element. Give me a group of people, none of whom I know and I’m comfortable going around the circle, getting this guy’s name, and her name, right around the room. I do my best to remember their names so I can impress everyone by making it personal. Sometimes it works, and sometimes I accidentally spit out the mental device I use, “Hello, Chick With The Fat Calves, er, I mean, Nancy.” That's when I collapse.

In all seriousness, Nancy should be an easy one because I’ve known other Nancys that look similar. And the way life operates, they’re not ever going to show up together in the same room. Life seems to have a way of doing things like that in a helpful order. You meet Nancy in kindergarten, then a different one a few years later in college, then a different one yet at work, where it’s almost impossible to make friends because you’re too focused on job evaluations. Right now, just skimming through my head, I don’t know any Nancys that are actually likely to show up. But if I do meet one -- it might happen today! -- I’ll tag-pneumonic her with this blog post...

I kind of like meeting people, and yet most of me sees the downside from the start. I’ve been going to church, trying to broaden my horizons, and I’m seeing how hard it is to keep people’s names in line. So far none of them are Nancy. I’ve been there probably 6 months and I know about eight names. Whether they’re paranoid about me or my paranoia about them is the hindrance, I haven’t figured it out yet. I remember in some of the churches of old, very judgmental, the direction of the paranoia was easy to see. But the new way of doing things -- I’m OK, You're OK -- no one’s quick to judge me, at least orally. And I’m not quick to judge them. I'm very wary.. So far -- it might be easy to guess -- I fit in OK in the general activities, but the interpersonal stuff’s a rough go, a hellish nightmare.

The obvious downside of meeting them and investing the time is you might get sick of it and want to drop off. Which is easy enough to do, it’s true, if you move out of state, to a different country, or have a facelift. But even in The Big City you have a smaller area you’re ranging in, so it’s much like a small town, and now you’re suddenly needing to take alternate routes to get anywhere. With the hope -- hope against hope -- that you won’t meet anyone else, because there’s only so much one guy can handle.

If you feel the same way, please don’t tell me. It might lead to something. It might even turn out that you live only a block from me. Then we’re waving, then we’re speaking, then something horrible happens -- your landlord throws you out because your cat’s pregnant -- and I’m left alone. Or you want to move in with me and ... that's not something I could allow.
Posted by dbkundalini at 6:00 AM