When We Invented Rationality 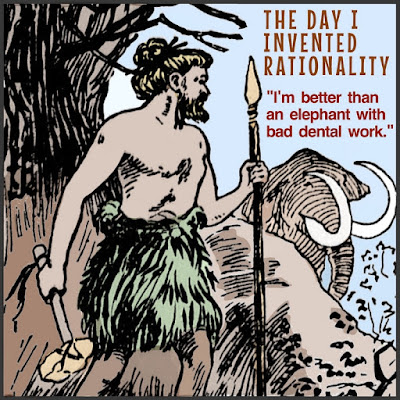 Here’s my best guess on the nature of consciousness. Not in the sense of being not passed out or awake, but in the sense of a mindset above the jungle, being uniquely human as opposed to our former animal nature: Man was ranging the veldt everyday for centuries. After a time, centuries, he realized he’d been watching nothing but gazelles leapfrogging everywhere, then put two and two together and thought [I’ll spell out what were only caveman grunts]: “Without the veldt in my way I’d be able to see farther than ever.” Up till then he had the view of tall grass in his line of sight to the point of distraction: “I missed the last gazelle being slaughtered when I was no more than 10 yards away.”

See that? The consciousness bug bit him! And he never looked back, but instead took upon himself the first task, to father as many children as he possibly could and teach them the new science. That happened, and 500 years later the veldt was as transparent to the eyes of man as if it’d been glass. Clear glass, no runs, no tears, no ripples, clear as a bell. And once you make that kind of progress, forget about it! You don’t go back. Just as the clear-eyed gazelle traverses the surroundings in leaps and bounds, so it was with consciousness. Man put his finger to his temple and recited: “I’m smarter now, I’m wiser now, I have the wherewithal to see for miles, and it has heightened my other sensibilities, giving me the ability to tell the future, learn about mapping, stow food away for the winter, fish with dynamite, fit saddles for horses, and take coffee breaks.

I'm kind of feeling for our friend the elephant or mammoth there. And not for the usual reason, their inability to slip inconspicuously out of parties. That’s a talent I have, although it’s usually overridden by my ability not to show up in the first place. My feeling for the largely-challenged animal has more to do with having to exert so much energy on their tasks that they truly feel used. We foolishly think,"They don’t care. They’re big lummoxes anyway, they’d feel bad if we didn’t have them working like the devil all day.” But look into the eyes sometime of these gentle giants -- and you about have to look into their eyes one at a time, that’s how big a head they have -- and you’ll see a lot of sorrow. For what, we may never know. My advice, give them a peanut and pleasantly point them toward their work, “There, there, work hard and there will be another peanut in it for you.” They don’t actually care.

And maybe they’re better off. Look how miserable we always are with our great consciousness. Because paranoia is everywhere! Which could be a part of the evolution into consciousness. We’re not quite through evolving. The next step being to overcome our paranoia with even greater consciousness. That’s what I’m looking for, and hoping (maybe against hope) that the paranoia won’t be even greater yet, with bigger and more horrible levels/types of consciousness, say, over the next 4 million years, leading to ever more virulent, unending, horrible paranoia. In that case, Lord, thanks for nothing...
Posted by dbkundalini at 6:00 AM