My Dog Safe With Buddha 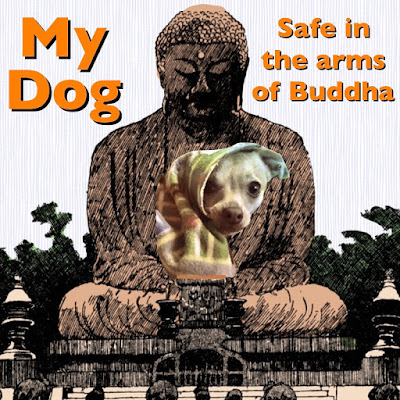 (Not part of the Paranoia series)

When they came out with the latest virus, naturally I was concerned. What am I going to do, drop dead with all the other losers? I always heard it growing up, “Get your exercise. If you don’t, you’ll deserve what you get.” By which they didn’t mean all the boys, but a short life, a sudden death, maybe dangling from a rope, depending on the crime.

My concerns are like everyone’s. I came into the world a few years back, relatively speaking. My memory’s hazy on the subject, but there were apparently 15 billion years when I wasn’t here. Then at the end of that vast span, I popped into the world like clockwork and since then have hung on for dear life. Saying, “I will not willingly go back into the void. I’m here, deal with it.” I said this through times of war and peace, although I didn't serve in either. With some regret, though, because I think it would've been great to serve in the war. Maybe you remember my pitiful longing for the service in my post, “Sarge: Chitty Chitty Bang Bang.”

My big problem with the Corona virus these days is, "What’s going to happen to my dog if it happens to me?” My dog I got on a fluke. Her mother was in the yard minding her business when a smaller dog got through a crawlspace in the fence and consummated a brief relationship. Yielding five puppies, one of which became mine. So it was someone else’s problem and we’ve been joined at the hip now all these years. Had I been a block away, had I not answered the phone that day, we would’ve never met.

But we did meet, and we’ve had a special bond ever since. I’ve seen her through many things, learning to love dog food, etc., and I get her only the best. We have to keep going. I’m all she’s got, but with my advanced years naturally I worry what could happen. Now, all of a sudden, there’s a virus going around that threatens people of my demographic, older gentlemen who breathe and touch their faces. The store’s even out of paper towels, that’s how hard up we are. Because I use paper towels to clean up my dog’s poop. And suddenly they’re more precious than gold...

Anyway, have I mentioned, I can’t die! Because what would become of her? She’d wake up and not get her expensive food, not go out to poop, etc., She’s already kind of upset about the paper towel shortage. This other thing, my demise, I don’t want to have to lay that on her too. She might stroke out and I’d be left alone, with my last roll of paper towels that I was holding on to for special times, her birthday, the day she was spayed, etc.

Beyond the frills of paper towels and things, there’s the sorrow she would feel if I were suddenly stricken by viruses and died. “Why'd he have to abandon me? Was he thinking of the time I accidentally peed on the kitchen floor?” That’s terrible, I don’t want this dog to have one ounce of troubles or sorrows. You might remember, that’s how Buddha started out. His dad kept him from troubles and sorrows. Then he discovered suffering and found out, “Shit happens.” He sat under the bodhi tree and was enlightened. If I die, my dog will have things to deal with, heavy stuff, and might even be peeing at the base of a similar tree and come to a place of inner knowledge. I hope to impart enlightenment to her, but so far my attempts have been met with resistance. She'd rather play with dog toys than meditate. So I just breathe and wait.

But so far I’m still alive, so Buddha can meditate and keep his gentle arms and hands folded until that day, if ever, when I'm not.
Posted by dbkundalini at 2:22 PM