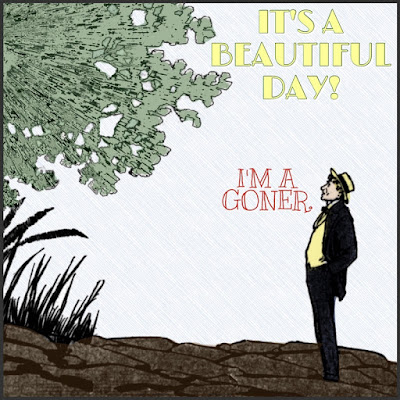 Alas, I've died and gone to the land where paranoia reigns supreme, everyday one pitfall after another. I’ve ventured these parts before, the sights and the whole spectacle. But really, I'm likely not really dead, but this is my sad lot in life. It happens a lot, these universal shoves into the mud, the bony cosmological knee to the metaphorical crotch, a seemingly beautiful conch at my ear but no reassuring sound of the sea. Just a far off voice from the past -- traveling light years to arrive and just in time to say, “Your party's not available. Hang up and try again later, loser.”

I slam the phone to the table and the murmuring voice goes dead. The vastness of space then reminds me, I'm a slug. So how’s that for luck? It sums up my life experiences, sour from day one. And now I’m out of trust, out of hope, my optimism's shot, and I am, above all, paranoid. A strain of paranoia for every occasion. From “Woe is me” to “What’s a guy gotta do to catch a break?” Plus, it might sound trivial and I should leave it out, but I'm also out of Pepsi.

I hesitate to go on -- I have big plans for the blog but I'm reluctant. And yet, when there's grief for one, there’s joy for the rest. I could help so many other people just by plummeting through all the usual supports and landing with a thud. Just my luck, the role of the redeemer. All this time with the huge grief and now you're cheered up. The same thing used to happen to me. I'd hear of someone with a terrible life and I'd thank my lucky stars it wasn't me. I'd even get giddy, call a few friends, they'd come over and we'd jump on the bed and throw bags of confetti into the air. When we were real happy we'd open the bags.

But, please, don't worry about me. Whatever you might've done for me, that time is long past. Please, not one pathetic syllable. But there are other worthless sufferers out there moaning and groaning, turning over in their bed, falling out occasionally, crying like babies, shrieking at their window, raising a ruckus and driving everyone crazy. Possibly say a little prayer for them. I'm still able to talk in sentences, so I'm actually doing pretty well. My blog helps me. Ten years ago a reader told me "Attaboy" about something, my good spelling. So when I'm real down I find his friendly word and reread it. I also emit forth a cleansing shriek now and then. Let me see if I'm in good voice: "Shriek!" I bet they heard that across the street!

Anyway, what's a constant 24/7 paranoia really like? First, possibly to shake up your assumptions, it’s not sooo terrible. It’s not great, but there are worse things. This is mostly mental, which is still painful. But no one’s twisting my arm behind my back, no one’s depriving me of meals, and despite the constant fears, no one's broken down the front door and made off with my TV. It helps that I pay for security, an alarm. But I do have the paranoia that it might be false security, just an empty box that'll do nothing in my time of need.

Come by this month and I’ll let you know if things get any better. Spoiler alert: I already know you won't show up. Who would? But maybe by the end of the month I’ll somehow be magically reconciled to life even with this horrendous burden. It's hard to picture. This ain't flag football, it ain't beanbag. It's real life with real life consequences, one cruddy thing after another. And I’m very aware of what I’m up against. I know how life turns out, in wretched bloody shambles, the main beam of the house crushing me.

Oh well. As Aunt Alice used to say, “Cheers dears!”
Posted by dbkundalini at 6:00 AM