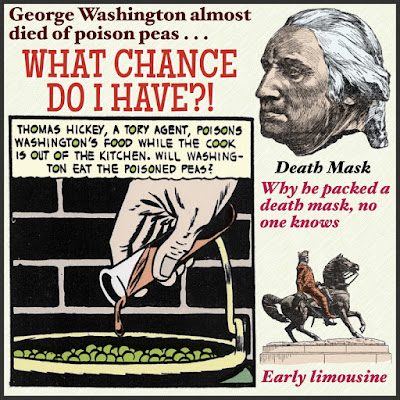 And speaking of assassination attempts, what about George Washington’s brush with the poisoning of his peas? I certainly didn't see that coming and I doubt if he did. But obviously a certain Thomas Hickey not only imagined it but carried through with his devious thoughts. I haven’t looked up the details, not because I’m frugal with my time, but to avoid knowing anything more about it. I get something like that in my head and my paranoia's worse. So many times I've thought of things just to see them happen! Now this I've thought of -- poison peas! -- but I just brushed with it, so hopefully I won't have any worries.

But on a deal like this -- ha ha -- knowledge might be power. And the last laugh should be mine, because I don’t eat peas in any real sense. I never buy peas, no one I’ve ever lived with except my Mom, who’s now passed, even liked peas. Just having them in the cupboard made them the most secure food in town. None of us except her had any desire whatsoever to eat them. If pea farmers were waiting for me to keep them in business, they would’ve been bankrupt a long time ago or would be selling carrots.

Now that I think of it, though, sometimes there’s occasions where a few peas will be in something. You go out to eat, get a salad, and there’s a pea or two in it, since they’re supposed to be good for you. And -- I’m raising my hand -- I am guilty of eating the occasional pea in a salad if it happens to be there. Just so they’re not together by themselves in a huge quantity. Then it’s out of the question.

And now that I’ve heard this story about George Washington, it only demonstrates a hidden layer of wisdom to my life. I was already anti-pea. I never heard of his trouble with peas before. But somehow I knew to avoid them. I had to have been thinking there’s something about these that could be poisoned. Even though we honor Washington for whatever it is he might’ve done -- crossed the river once -- we’ve never been that excited about him surviving poison peas. Now, though, that’ll be the first thing I think about him in my remaining years.

It would’ve been great to have known that in school. The teacher calls on the class to enunciate a few syllables about George Washington beyond cherry trees and a desire to always be first at everything, even the presidency. I shoot my hand up, the other kids are about to laugh because I’m about to say something completely stupid, and out pops from my mouth this most important thing there is to know about the Great Man, “He was almost killed by poisoned peas, and I’ve got my eye on the lunch lady!” The lunch lady’s called forth and hanged by the neck from the gymnasium rafters until she’s dead. Then we cleanse the land.

Looking closely, they even have the perp’s name, Thomas Hickey, a Tory agent, But that’s a Tory for a different day. Next we consider that George Washington had a death mask, put it on and faked his own death, then got the hell out of there on his Early Limousine. And the Secret Service still hasn’t lived it down!
Posted by dbkundalini at 6:00 AM