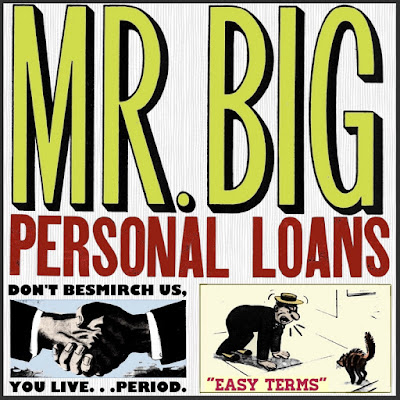 I really really really feel sorry for anyone out there who’s been caught up in loans. I’ll edit that word out later, and probably go with something different, something they won’t be searching for, with the purpose being to squash out do-gooding guys like me who might cost them beaucoup bucks.

These are things a guy like me needs to keep in mind, since I appreciate living and breathing. And there's forces in this world big enough and ready enough -- the executioner’s finger’s always on the switch -- to take out pipsqueaks like me. I don’t know if I can go on here, I certainly know I shouldn’t. But if I watch my step and encode my words, like saying “apple sauce” for “dollars,” and “purgatory” for loans, and focus on keeping this subterfuge under wraps as much as possible -- I’m not calling for their eradication, if that’s what you’re thinking -- I just might be OK.

How’d we ever get in this trap? We didn’t used to be! But back then I got some real low-down from my family on purgatory. They (purgatories) were something definitely to avoid. But going to the bank where you had your accounts and taking out a purgatory on something like a car or house was good. Just getting down in the weeds, though, with purgatories for everything else was a definite no-no. You may as well have been asking to be shot on sight. With the cause of death being your own stupidity. Because if you were not able to pay the apple sauce back the guy issuing the purgatories would be on you like Dillinger or Capone.

Remember Dillinger and Capone and all those bad asses? (If any survivors from their extended families are reading this, no disrespect against your forebears.) Although if I had my way, not only would they have been strung up from birth -- if we only knew -- but the taint of their seed would’ve been wiped from the earth generations back, just like if we get sick we cough it up and spit it out. Presumably to evaporate on the ground since there’s very little practical value to it beyond our good health. But purgatories, you should know, once they're out of control, you will know nothing about a healthy future -- maybe healthy for the purgatory guy but definitely not you.

And I see the signs they put up everywhere around The Big City, Mr. Big This, Mr. Big That. You’re tight on money this week, stop in! My advice would be to stop IT. Because miracle upon miracle, you’ll still be tight next week, something you want to stop. See the pattern here? Then the next week even, dammit, you’re tight again. Stop in for a quick purgatory. It’s simple, the apple sauce’s flowing easy. Week four they’re bringing out the paperwork, none of the terms in your favor. Week five they’re scraping up whatever is left of you once Mr. Big’s dog (reportedly a wolf) has eaten all he can choke down.

Finally Mr. Big's dog passes a big one, the your remains.
Posted by dbkundalini at 6:00 AM