Neighbors Talking About Me 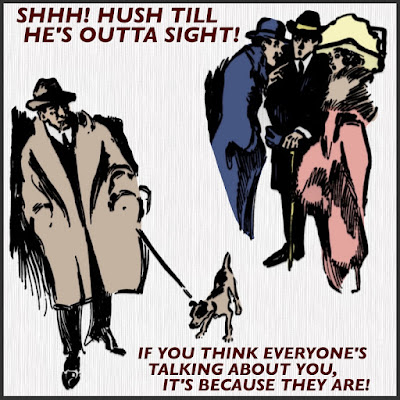 If you’ve been with me so far -- and I don’t suppose you’d tune in midstream since it's seven years bad luck -- you’re probably afflicted with an above average case of paranoia. Which is another way of saying a below average disposition, because -- I discerned this by a show of hands at the last meeting -- none of us is particularly proud of it.

Just to show you that pride is a non-existent thing for the truly bereft in the attitude department, the day these people hushed themselves -- a congeries of whisperers -- I went home and hung my head in shame and cried till I was howling. Which got my dog in on the act so I softened. I thought, “Oh no, not the dog, too.” But she nodded her head, then let it hang low, the exact technique I’m known for. And immediately howled up at the basement ceiling and I joined in, saying affectionately, “From one old dog to another!” We high-fived and I poured her a little dish of beer, saying, “I know you’re only 3, but in dog years that's 21.”

But probably most of us hate being talked about like this, so it’s always better to avoid crowds and making a spectacle of yourself. But, again, thanks to the dog, I always have to be out and about. I try to hurry up the process but some things are hard to hurry, dogs and their cycles being one such thing. Then what? You haven’t got a crowd surrounding you, but there’s no question they’re out there in their houses, wherever. And with communications being what they are, free phone calls, unlimited messages, blogs like this, it’s indisputable that they’re talking about me wherever I am: “He’s out with the dog again! Yes, the same dog, he only has the one!” Or, “Look what he’s wearing, a sweatshirt and insulated jogging pants.

Here’s a little free advice, neighbor folk. You’re a bunch of brainless simpletons, locked away in your idiotic houses getting your jollies, getting your rocks off worrying about me and my dog. How about keeping your mouth shut? Such an easy question, how about an answer, as Elvis once sang. And hold down the Elvis jokes, because I’m sensitive in that area too. Although in this context, him singing “You ain’t nothin’ but a hound dog” would be apropos, except you as neighbors don’t even reach to dog-level, mostly scoundrels. And I’ve helped most of you before, too, picking up litter. Speaking of dogs.

I don’t want my misery to become your misery, OK? Assuming you’re a friendly sort, and feeling naturally sorry for me and my dog, I thank you. Anyone who discounts this torment, though -- you, I can’t even say it -- Come on, buddy, walk a mile in my shoes, OK? Yes, they’ve been chewed by the dog, but try your best to walk in them. Betcha can't!
Posted by dbkundalini at 6:00 AM