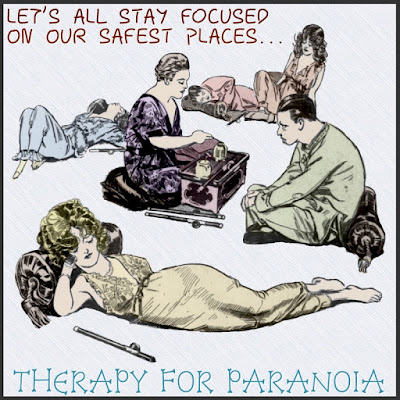 Of course there’s therapy for paranoia. Although I’ve forgotten the details from the many times I've looked into it. The idea of showing up for therapy in anything -- while I guess it’s a good concept -- is something I’ve never actually done. Why? I'm afraid it’d incriminate me if I said why, so I won’t go into too much detail. But just leave it with a vague, “To each his own.” I don't want to be incriminated, having something like that on my personal record.

So that's it, count me out. As long as it’s a matter of your own choice, I’m good. Although if this is truly a picture of it, it might be tempting. Just looking around the room, everyone seems to be definitely zoned out in a positive way. There’s old Madame Grimaldi at the switch. Then young Flora, Fauna, Frizzy, and Weedette zoned out. With -- what have we here? -- his sleeping bag rolled up and stashed behind him and zoned out in his own way, Danny.

Leading to a question I’ve asked myself many times, When you’re trapped and strapped down in a paranoid fit, is it better to take proactive measures against it or is it an important part of your life that you shouldn’t miss for anything? I know I’m in the minority here, but I think it’s important not to miss too much. There are exceptions, which, if I can keep it together in this moment I might sketch out. Eh, what the hell, let’s get to that first: The exceptions would be if you pose a threat to others.

In this case, if I’m reading Danny right -- and as dull as he looks his condition’s still clear as a bell -- if he scooched one inch closer to Grimaldi, or moved in any direction toward one of the sleeping belles, I’d be on him with the burliest attendants I could rouse. Safety is first and foremost, saving the victims and going as easily on the perpetrator as we can. But as we all know -- any newbies, please step out, this is an advanced course -- sometimes we have to reinforce a perp’s paranoia with a strong response. Taking him out … of the room with all due prejudice, then freeing the victims and getting them safely back to their rooms.

And I don’t like the arrangement one bit. Look at the short straight line between Danny’s dull eyes and Madame Grimaldi’s soft exposed neck. I see a serious threat of displaced identity in his eyes, which can only manifest itself in agitation and a quick lunge. He looks calm. But most wolves look equally calm just before they spring and tear the throat out of their prey. Which is nature’s way, no doubt, with no possibility of institute-threatening lawsuits. If there’s no chance of lawsuits, or inconvenient damage to property, I suppose, let him go. But a real threat, you simply have to take the perp out.
Posted by dbkundalini at 6:00 AM