Daughter of The Gods 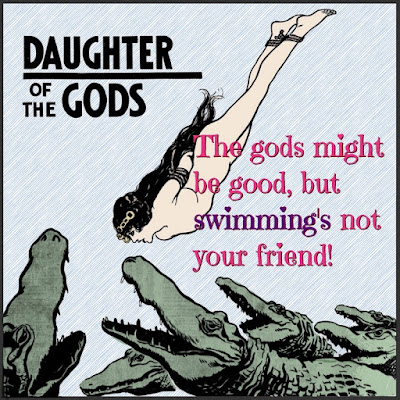 Hmm, I want to be therapeutic about paranoia. I've had problems with it for centuries and I don’t want the so-called relief to be more of the same, driving me and everyone down into deeper and even more treacherous depths. I'm like anyone, I see a naked lady tied and surrounded by crocodiles or alligators -- aren’t they like one chromosome off? -- and I’m thinking, Pessimistic! She's a goner...

But then I realize, Damn it, you fool, you're giving up on the gods a little too soon! Where's your faith? Where's your patience? Haven’t you learned by now that the gods tend to be on the surprising side? Inscrutable, in the end aroused, certainly not incapable, not quick to yield or cede territory, especially among their own. Is there a pantywaist god among them who'd send his or her only begotten daughter into a world of sickness and sin only to be had, to be a mark, to be defeated? I think to myself, How many questions was that? Then repeat the whole spiel back in my head, counting fingers. Five questions. I quickly answer, “No, no, no, no, hell no...”

Among the gods everything (potentially) has a quick reversal, the rug pulled out from under the enemy’s feet, the establishment of justice, a claiming of glory that was never really lost, and a surprise ending that should be no surprise. They like to get the enemy right where they want him. In the sweet zone for leveling them, flattening them, going nuclear, boom! Of course there’s no real blame for the alligators, so their death is incidental. They’re only doing what’s in their nature, and if their nature says the chick's indeed fit for eatin’ on, that can’t be wrong. But they still must be defeated, because ... this is the daughter of the gods.

Which could be true of any of us. Explaining in terms anyone can understand why it is that bad things simply never come to fruition, but are thwarted just in the nick of time. And certainly any foe that felt it might have it over on the very daughter of the gods, eating her and justifying it lightly, would have to be deluded, or to put a positive spin on it, more optimistic than the situation warrants, given a considered examination of the circumstances. Enough for theodicy, albeit explained in simple terms. The gods wipe the shit off their shoes on the enemy.

How about me -- I'm no crocodile -- could I possibly have the hots for the daughter of the gods? I feel that is too personal a question and a question wrought with potential consequences via-a-vis my continued existence in the world and in the presence of the gods to answer truthfully. So let me answer it by really not answering it, while not quite not answering it: Given the right circumstances, anything is possible if the gods are not offended. If they're happy with a potential son-in-law like me, who first wants to sample the goods, that’s their business. I can only accede to their desires, although I would not be quick to give alligators the same rights. There would definitely not be a joining together of them in my thoughts as a party to any menage a trois, her, me, and them.

I guess what I should really say is, the gods are a psychological help to us, and the daughter of the gods would be a salvific figure, a metaphor, of the communications from that realm to this. As the alligators of sin threaten us -- even raising paranoia in me, and other unfortunate folks -- we desire the sweet and innocent nudity of this precious daughter, bestowing the goodness of heaven to take away our paranoia and allow us to swim free. Just to make everything crystal clear, so there’s nothing left to chance between the gods and us, I want to lose paranoia, not gain piranha.
Posted by dbkundalini at 6:00 AM