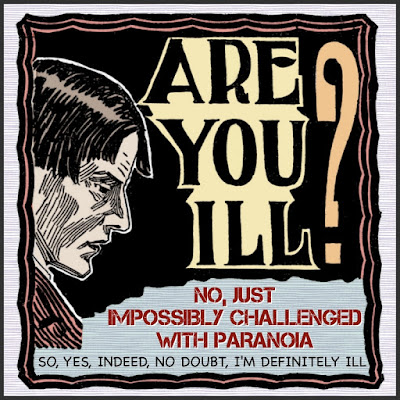 No, not ill, haven’t coughed all day, except for the bacon I swallowed wrong. Am I right? What is it with bacon? How come it’s so hard to cook it so the meat of the goodie -- the non-fatty parts -- aren’t hard as hell? I don’t remember this growing up back when Grandma used to cook it. It was uniformly soft, from stem to stern, particularly if you were taking extra care while it was in the pan. But these days, whether they’ve changed bacon's secret formula to compensate for tougher times, it’s always hard. And all the trying I do, my level best, nothing I do makes a difference.

But that’s one for my cookbook series, not yet planned. There is, though, an element of paranoia that goes with it. And if the problem originates with me, I’d like to know it. But there’s no way to know it unless a huge group has the same experience. And I know a lot of people have given up bacon entirely for health reasons. Was it the impact on their health from the weird hard bits that you really can’t give your dog?

I’ve gotten real sensitive about what I give my dog, real careful, that is. Because she had some bowel obstructions that I was a slow to realize. And here I am, her only full-time caregiver. I definitely don’t want her death on my conscience, even though, yes, it would be mostly her fault. Because she’s extremely undiscerning about what’s good for her and what’s not. Anyway, the bowel obstructions: Those came from dog treats and the fact that some of the ingredients of dog treats are relatively hard. And they get harder over the course of a month or so, especially if they’re exposed to the air on a daily basis. For some reason they don’t tell you that. And it’s not in the fine print on the bag like we’d expect human food to come with warnings if it were so dangerous.

It’s funny I haven’t even lifted a finger for my cookbook series; I’m sure there’d be all kinds of stuff that'd appeal to the average person. Like my Grandpa used to say -- I think it was him, maybe some other guy entirely, “Everyone’s gotta eat.” That’d be a decent series for that reason alone, I'd be getting the traffic from the vast pool of people who have to eat. Whereas with paranoia, they say not everyone has it, and most are too paranoid to admit it. It's just the unfortunate few, I guess, like me and a few other guys I know who not only have it but explore it. Not that that makes it anything to be proud of. I’m not proud, and if I were I’d be afraid to admit it, because how much grief can an innocent guy stand?

About these dog treats, though, I took her to the vet a couple times. And the last time they kept her overnight. Then I paid my $100 and got her home. They told me only, “She had a bowel obstruction.” No word about what the obstruction was, and I didn’t ask. And she went back to pooping like normal. I resumed her normal diet, including the dog treats. And after a couple weeks, guess what, the same signs of a bowel obstruction started in. Then I thought, What could it possibly be? She gets her normal food and two dog treats a day, nothing else. Wait! Replay that last piece, “and two dog treats a day.” I grabbed a dog treat and examined it. As the month goes on, they become very hard.

How did I fail so badly on that? What other problems are coming that I should know about? One interesting thing about the bowel obstruction is it wasn't all bad. I had to walk her farther to get her to go. Which led one day to me finding $100 on the ground. I was happy with that, but the vet was over $100. Meaning I nearly broke even, just a little short. About how my luck goes, better than nothing, but nothing worth writing home about either.
Posted by dbkundalini at 6:00 AM