Electro Robot and Sparko His Dog 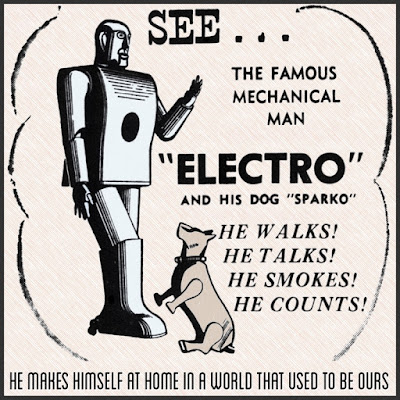 I’m letting Electro stand not just for Electro and his faithful dog but the whole computerized world, which as we know has taken over and has us marching in lockstep to do its terrible bidding. We have developed a horrible dependence on all this stuff, which is so bad that I’ve already given in to temptation three or four times in the last 10 minutes to check my Facebook. Someone may have “liked” my latest post about upgrading to a better Electro; Model 3.2 is out in case you hadn’t heard!

There would be a definite improvement in my life -- as I perceive it -- to tell my dog her services are no longer necessary and replace her with Sparko. I could argue that Electro has a hole in his heart when Sparko’s not around. And with an actual dog, nature has given them a wacky software, meaning they need to poop and pee more often than my own software wants to handle. In that way Sparko would be an real improvement. But just to keep myself in the good graces of pet fans -- if there are any -- I'm not taking immediate action, as I continue (reluctantly) to take my old-school dog out, so far still under 50 times a day. I even bag most of my own groceries just so I'll have enough poop bags and so far the store hasn't imposed a limit on the bags I can use.

But Sparko and Electro so far are just a dream not come true for me. Plus, I’m actually reluctant because, Do I really need something else to consume my time? And none of my neighbors have one either, so there’s no pressure to keep up with them. Really, the world has settled down quite a bit from the excitement of getting computers, hard drives, etc. I was looking at some of my blogging from the mid-to-late ‘90s, and my graphics were about the size of a stamp. They had to be small enough to fit on a floppy disk. We're never quite there... So it probably pays to wait.

Now all my floppy disks are gone, I don’t know what happened to them. Must’ve been when they quit putting the drives on computers we just thought, “What’s the use? Just move on.” The key thing to note here is that whatever you have now, it’s crap compared to what is to come. The old Electros will be sitting in the dump, configuring themselves with satellites above to wreak vengeance on us, and we’ll deserve it.

This is where the sad side of Sparko enters the picture. Small enough and well-programmed enough to do Electro’s bidding, he’s also on important missions for outer space masters to destroy our infrastructure. One mechanical dog against the world! But they’re faithful, if not objectively good, so what Electro wants, Electro gets.

If this doesn’t make your head swell with paranoia, I guess that’s OK. Once they take you out, as in terminating you as their so-called master, that'll be that much more space for me to stretch my legs and relax, to the extent relaxation’s even possible these days.
Posted by dbkundalini at 6:00 AM