My Invisible Nuts, Her Cleavage 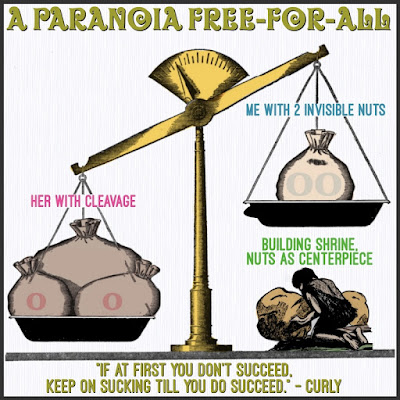 Remember yesterday when I concurred with holy writ as to the creation of woman from a rib? That’s pretty good, since women are essentially beings to be worshiped, and if you're not prepared to go that far, they should certainly be emulated. Which is not a dirty word, by the way.

I can think of my parents, what they were like, one of each. With the man having certain distinctives also, including his caveman consciousness. “I push together rocks [ala the Flintstones] and have a home. In home I keep my rocks safe. And get them off in the privacy of my humble abode. Which I’m abode to do right now if Wilma doesn’t hurry up and get home. Her loss, my loss! But there’s always tomorrow, where I am, way back in the past.”

It all relates to paranoia. Existence is never just equilibrium, it’s always driven by paranoia. But paranoia, being part of the whole, also acts as equilibrium. So in this obscure, cockeyed way of looking at it, existence truly is just equilibrium in action. Catch that, it seems contradictory but really it’s symbiotic. Like if you get sick and need some biotics. They work together in your body to make you well again. Like clockwork the perambulator goes back and forth, measuring the seconds of time and eternity. They then meet in the middle and that’s your life. There’s the spark at your conception then your demise, with the whole middle part being our now. How could anyone not be paranoid? Because they haven’t tasted of the fruit, generally forbidden.

Note: If anyone makes up a religion based on that paragraph, I need my cut. I'll settle for a piece of the holy literature.

Lets take a look at this balance thing, and if it clears up any obscurity in our study so far, I'll be completely surprised. But what else do I have to go with? All the really good explanations of paranoia, gender, and getting your rocks off have been taken. Everything in science and literature are on a first come/first service basis. And there was a lot of coming and service before I even showed up, so I’m working really with the off-scourings of feeble minds.

The device is a combination balance and weighing thing. You can see which thing is heavy (perhaps most important) and which thing is lighter, the opposite. And good grief, what do we have here, a little happiness for the ladies, I’d say. At least two bags full, and I’d make the argument with those hips and the hanging-from-the-hips part, she’s got the whole package! Then there’s our friend, First Father, the caveman with his invisible nuts, weighing really very little. Yet instead of building a shrine to her, he carves out and worships his own representation. But the tide might be turning on that in these latter days. I know just looking at it -- while it causes a certain amount of terrible paranoia to say it -- the side I’m going to take and like a double-barreled chest holster, support.
Posted by dbkundalini at 6:00 AM