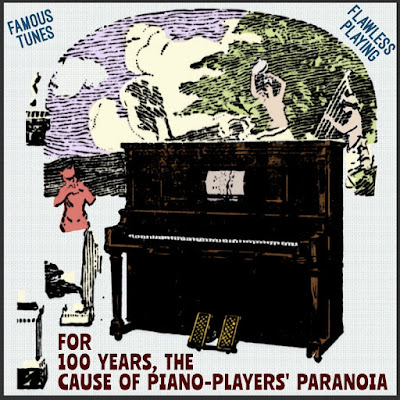 One of the things I never learned was to play the piano, and really all it is is a typewriter that sings. I had a guitar I kept on my back. I got so used to wearing it I'd forget it before sitting down. Then one day I decided I had no talent. But of course I found myself able to hammer out a few chords and ended up playing three or four songs for some folks in the nursing home one time. None of them shrieked bloody murder and ran out the door, but they would’ve if they could’ve. Even today the survivors are still talking about it. I'm just guessing.

We actually had a piano where I grew up, along with a chord organ. But no one in my family ever learned to do anything with either one. I remember trying to figure out the chord organ and having my finger on the button a little too long and my Dad shrieked bloody murder and hollering up the stairs, “Play a different note!” That was a setback for me. But he didn’t run out the door, so I kept trying to up my game. It turned out I was never good at it, a disaster. I’m not sure if Einstein was ever a great piano player either. But we both probably could've been.

So it wasn’t my fate to be a musical genius, which I wanted to be. I heard a line about a particular guy though, who ate beans and was considered a musical genius. Something like that is true of most of us.

I’m going to propose something for myself, and see how well I stick to it. Every time I’m at a place and someone starts playing the piano or organ, I'll just throw up my hands and mutter, “It’s all been done to death,” and walk out. It really is true. I may not know how to play, but I know how to hear, and it’s the same old boring grind time after time. They start somewhere in the middle, they toss in a bunch of lower notes, then a bunch of higher notes -- the area of the keyboard supposedly meant for flair and flourishes -- and you’re supposed to sit there and take it. So you lightly applaud, then grasp your stomach, “I think I’m having an aneurysm,” and run for the door, “Get me the hell out of here!”

Things that have literally been done to death are my kryptonite, the source of a lot of my paranoia. If you’re going to play the damned piano -- how boring -- at least acknowledge that you're not the first and probably not the best. Otherwise they'll just think you're showing off.
Posted by dbkundalini at 6:00 AM