Dear Earth Souls Of The Past 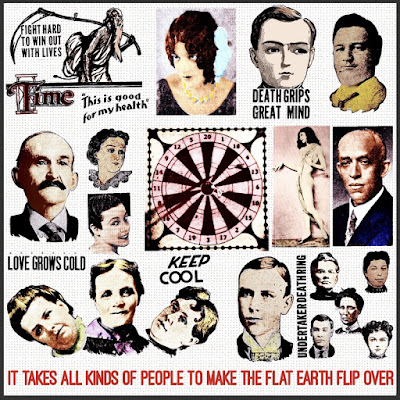 I had a great time finding and arranging faces of all these dear earth souls from the past. I went back far enough, I think, that no one today will be able to say, “Yeah, I knew him personally, quite the guy.” And certainly they were remarkable persons at some point, but they’ve made the passage -- the old ticker fizzled out -- and if they’re conscious at all, it’s merely the huge ultimate amalgam of confused, indistinct non-specific Consciousness with a big C. Happening automatically by eternal life abilities, flitting about in the afterlife.

The hopes and dreams they had -- and the fears and heart-crushing paranoia they experienced -- are all past. Of course there’s people in our world today, and this is true for many generations to come, who are related in some way to most of them. A little research and you’d find great connections and be able to say, “This guy on the left with the stereotypical Old West mustache, my own nephew takes after him.” Or the three-headed lady bottom left, “Spittin’ images of my three-headed cousin! Who always hated the jibe, “Hey, Six Eyes!” Wonder what she had “where it counts,” going at it in shifts or just one hodge-podge V-V-Vector of mutual pleasure, and perhaps inspiring the first utterance of the now common question, “Was it good for you?”

Then there’s the other end of the spectrum -- undefined -- “Death Grips Great Mind.” Looks more like the kind of personality who would be coexisting with Old Man Bitter Paranoia himself. And if there’s any death gripping, it’s his hands around someone’s neck, gripping the very life out of them. The kind of guy I like to avoid, although I might brag a little on myself and say I have a few psychological trips up my sleeve that have allowed me to withstand more than one mass murderer. My trick is based on the story “Three Billy Goats Gruff.” The perp gets his filthy hands around my scrawny, completely worthless neck and I open my eyes wide the other direction, exclaiming, “Look at guy over there so much plumper than I! I’ll bet he’d be funner to kill, you could pop him like a pimple...” And there he goes while I’m ducking out, exit stage left. I have a deal with paranoia that allows me to run really fast. I chop the air in front of me to cut down resistance, and going 30 mph, in an hour I’m 20 miles away, only seldom having stopped to catch my breath or pee.

The nude woman next to the dartboard, I’ll just mention her in passing. Whatever you may have heard, she and I have never been anything more than friends. She showed up at my place once only, buck naked, doe naked, fawn naked, the works. I was overwhelmed with paranoia of a different brand from two voices, the devil on one shoulder and an angel on the other. Strangely, the angel said go for it. But the devil said, “Don’t you dare!” That’s a dilemma! But I’ve been paranoid so long I even have a paranoia diploma and knew in this case the devil was right. The angel has a quota, trying to off as many people as possible to fill heaven with cheat grunt labor, those too sick to resist. But the devil knows if you keep your health, he might end up with a healthy soul to torment, a worst fate.

In this case, I resisted her charms, which I always do. I already know I’m going to heaven, so I didn’t fall for the devil’s selfish schemes. I’ve always been a fast typist and my heavenly reward is to type and retype huge lists of the worthy and the trash among us. Get on my good side and you might be something. Paranoia of a very rewarding sort.
Posted by dbkundalini at 6:00 AM