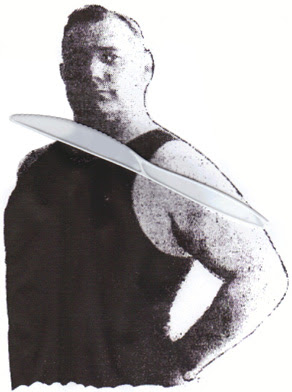 You remember, Big Brute beat the crap out of me and left me locked in a dark room, no light and nothing but a ratty couch. I figured I was in there for the whole night so I decided to make the best of it. But one of the gang, maybe meaning to rough me up, unlocked the door and came in. He put a flashlight on my face and saw I was looking bad, with the dried blood and all. So he stood aside and I left.

I roamed the streets most of the night, thinking it over, Do I really want to be a criminal? For a while I felt sorry for myself. I passed a window and saw my bruises and cuts. But then I came to a new resolve. The bastard jumped me, I took his worst, and I was still able to walk. There was no more doubt: The life of crime is the life for me. And really, getting beat up like that isn't so bad. It's all in the dues a newbie pays.

As for Big Brute, honestly I felt like I actually like him. After all, he did choose me to sit next to, so there must have been something about me that turned him on. Sure, the beating hurt like hell, but, you know, maybe he did pull his punches. As a former professional wrestler, surely he could've done so much worse. Maybe he beat me just enough to let the other guys know I was tough and could take it. Which could've had something to do with the guy who opened the door letting me go. Maybe Brute himself even sent the guy down there!

With my new resolve for the criminal life, then, I did more than brood over my situation. I did a few things wrong. Nothing terrible. Just enough to keep my interest level up. I cut a big hole in someone's screen door. And I saw some rabbit cages in someone's backyard and opened them. That was funny, because the rabbits were in more of a hurry to get away than me!

The next day I went back to Skidrow. The whole gang was sitting there and seemed surprised to see me, especially Big Brute, who looked up and appeared a little sheepish. I told him hi, trying to keep a meek, almost fearful look, which was a ploy. I wasn't making eye contact. One of the other guys asked me where I'd been. I told them about the screen door and rabbits, earning me about five thumbs-up. Conspicuous by its absence was a thumbs-up from Brute.

I went over and asked if I could talk to him, very meek and nice as pie. We went down the alley a bit, within plain sight of the others but far enough that we could speak privately, had that been my real motive. I hung my head, as though submitting to him in fear. Then he told me, "I did all that to toughen you up, so you'd make it..." He looked a little proud of that, but his pride was suddenly removed with a swift kick to the nuts and me behind him in a close approximation of a bear hug with my blade up to his throat.

I screamed out he was going to die! He knew I didn't have anything to live for and of my need for revenge. So he was totally convinced I was going to slit his throat and gut his sorry ass right then and there. "Down on your knees, you worthless scumbag!" I yelled, going down with him with the blade still in place. After he'd dropped, I kicked him full force in the center of his back and he crumpled head first. "Is that tough enough for you?" I screamed, my foot grinding his face in the gravel.

With a new understanding between us, we returned to the group. Of course they had a new respect for me. But for all my anger, things seemed very even with me and Brute. We were cordial, and now the best of buds.
Posted by dbkundalini at 4:10 PM