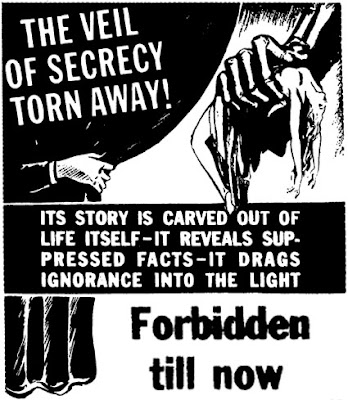 I'm sorry to be posting so late. But I've had a busy day here at the hotel in my role as the head of the Organization's prostitution operation. It's kind of amazing, what all I've done in just the last month, since I turned to a life of crime. That first night, when I was out cutting people's screen doors and tipping garbage cans, I didn't even imagine I'd be involved in the actual flesh trade! But here I am!

They put me in charge, like I said, and I haven't wasted my time celebrating my good fortune. I've been using my power to make some changes, always with the goal of increasing our clientele, their satisfaction, and so our profits. A couple of cosmetic changes I've made: The girls must take a shower at least every other day, and they're all scheduled for an annual doctor's visit for their good health.

But the biggest thing I've done is to go back to my psychological, human environmental sciences roots and try something radically different. Here's how I reasoned it out: Forbidden fruit tastes the sweetest. Now, prostitution by its nature is forbidden fruit. So it's already pretty sweet. But the nature of forbidding something means there is the chance of getting caught. Which is very exciting! But if we always have the place set aside, apart from the path of anyone who might notice, other than a few random guys with their heads down passing in the hall, there's very little excitement in that.

So I've basically opened the door and said, "Come in, take a look!" Please don't misunderstand me. We still have plenty to hide. We're always going to have guys who will be looking out for their reputation first and foremost. For them, though, they'll be the most excited! They still don't want to get caught, most of them, but there's definitely a lot of fun in the chance it might happen. Think about some of your own fetishes. You can attest that half the fun is the idea that someone might notice, and say, "Hey, is that pink underwear?"

Of course I'm spending a lot of my time trying to explain the concept to some of the guys who are leery of it. The mayor, he's not exactly sold on the idea, to say the least. The chief of police, he doesn't officially patronize the place, I should stress. And if they ever actually saw him here, it'd be hell to pay. Yes, this is the same guy whose desk the kid crapped on! If he finds out I was behind it, there might be trouble... But with everything I know, I don't think he'll talk!

One of my big ideas today was to open the lobby to kids walking home from school, and we had a receptionist serve them free ice cream cones. It's kind of kinky, I know, the danger that one of them might see their dad in there, but if there's no real danger, why bother? I saw one dad behind a potted plant, sweating it out. So much so, that when the kid left, the dad needed an ice cream cone, too! He was shaking, and still sweating, when I helped him into the elevator to go up for his date. But I have to think he was secretly very happy!

A couple of the ideas I have, but haven't had a chance to get them going yet, are: 1) To invite the Daily News photographer to walk the halls and snap pictures, randomly, of course, and only when it's least expected; and, 2) To hire a limo to pull up in front of the place at random times of the day and night. There won't be anyone in it, but there's nothing that makes people look like a limo! And if they catch a glimpse of a neighbor guy, their priest, the handyman, or whoever, in the doorway, so much the better!

How fun! And I'm thinking it's going to be very profitable!
Posted by dbkundalini at 8:39 PM