Big Brute -- A Meeting Of Criminals 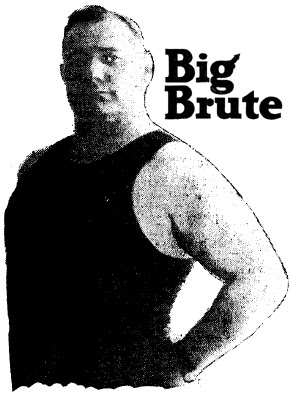 Well, I've been a professional criminal now for a few days. In case you missed the "extreme makeover," and maybe can't quite believe it, let me assure you, it's true! I've been reading the biography of Jean Genet and he was my inspiration...

I've pretty well fit in with the guys in the alleys in the Skidrow district of town. Socially, that is. I haven't carved out my own criminal niche as of yet, but they assure me I can look forward to various forms of mischief, each with its own distinctive thrills. I can hardly wait!

As it turns out, and this is surprising, they've got a kind of pecking order, just like we're in prison even though we're completely free. They trade cigarettes like currency, that sort of thing. Which might ultimately make me a millionaire since I don't smoke. And I'm not about to start, with the health risks and the fact that my current life insurance policies are all predicated on the fact that I'm a non-smoker.

I don't know the complete pecking order, but clearly the knives are out for anyone who screws with it. Around the fire last night, we were just shooting the breeze, and I said, "What happens if someone crosses the line vis-a-vis the pecking order, whether intentionally or unintentionally, if you indeed allow that distinction?" From each hand, as if synchronized, flashed an opening switchblade. From which I was given to infer that there would be some danger to the person who foolishly made that error. But they were nice about it, even to the point of issuing me my own "blade," as they called it, seeing I had none.

There was another interesting little piece of synchronization that occurred. (They seem to move in sync like birds, although it's more likely they're simply creatures of habit.) They moved and shuffled and were in a circle around the fire. I just kept my place, and noticed that one particular guy made a special move to be on my right. I learned he goes by the name "Brute," having been a pro wrestler at one time known as "Big Brute." We exchanged pleasantries.

Then I saw the nature of the gathering, which probably should be more innocently described in terms of a Society for Mutual Relief. Our dates for the evening were already present and ready to hand, so to speak. A scrawny guy was on my left, with Brute on my right, who moved with some authority to dominate my attention. Clearly, he wanted to get better acquainted, which was very nice. I'm sure Scrawny was happy with his activities, but if truth be known, my eyes were strictly on Brute.

Later, and this is where the story turns a little more unpleasant, we paired off, with me and Brute going down to some little room he knew of, mostly bare except for a ratty couch and an unshaded light bulb strung from the ceiling. Honestly, I figured we'd sit on the couch and talk of our interests, hobbies, and such. But when I looked up, he was all fists and kicks. He beat the crap out of me. So there I was, sprawled on the couch, bleeding everywhere. The guy had power. He reached up and squashed the bulb with his hand. Then he left the room and I heard the door lock.

I lay there in the dark, feeling kind of blah -- is that the right word? Crappy? Cold? Afraid? Dejected? But I still had my thoughts, and so my hopes looked ahead to a brighter future, to even bigger thrills in my new life of crime...
Posted by dbkundalini at 3:29 PM