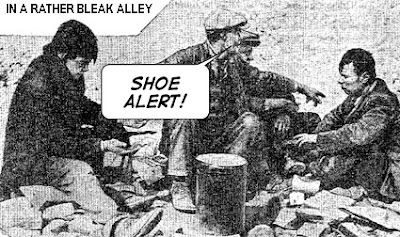 In case you missed my big announcement, I'm now a criminal, so far with latent derelict tendencies. I still feel the nagging (and unwelcome) scruples of my past normal life, but, believe me, I'm trying my level best to shuck them. I haven't made my first dishonest million yet, but I'm sure I'll feel better when I do.

Anyway, after breaking the big plate glass window on the square, I wandered the streets most of the night, looking for whatever mischief I could get into. I hate to admit it, but being new at this, most of it would probably be classified as trivial stuff to the seasoned crook. I went down one street and switched the garbage cans from one side of the street to the other. It's not much, but my philosophy is, Anything's better than nothing.

Next thing I knew then, it got late. And my body hadn't yet adjusted to the criminal's desire to stay up all night. I've been used to going to bed about 9:30, so anything after midnight and I'm dead. Plus, maybe you've been outside after dark. If so, you know it gets colder when the sun goes down. This night was no exception, and being winter it was that much worse. And yet... I'm either committed to this new life or I'm not. And I want to think I am...

So I wandered down one particularly dark street and tripped over a big rock in some guy's yard. It pissed me off quite a bit. It took everything I had, but I managed to pick the rock up. Then I took it over to his driveway and set it on the hood of his car. Just putting it there did some damage. Then I gave it a shove, and with the early dew, it slid all the way across, leaving massive scratches before falling with a thud off the other side. I'm hoping they can't get prints from a rock, because I left my gloves at home.

After a while I was back downtown and approached the Skidrow district. This is where some very tough hombres hang out, they say. I've always avoided this sleazy part of town, but now I'm claiming it as home base. Here I am, like it or not!

I turned down one bleak-looking alley, defying my better judgment. I saw what looked like four or five wide-awake ruffians looking at me. The sons of bitches were on me in a flash and I felt a series of withering speed-noogies on my quickly bruising pate. It hurt like hell, of course, but I thought of it as a rite of passage. You have to pay your dues.

When I woke up I felt an unpleasant breeze whistling through my toes. That's weird, I thought, paying no attention to the cold blood all over my face, I don't have any shoes! True enough! Some bastard (or bastards) unknown had filched my shoes. Real neighborly stuff...

Naturally I thought, Good grief, what am I going to do? Then it hit me. Even though my feet were cold, I made about as much noise as a cat. So I went to another alley and listened for a good long while. No noise. Then I crept silently down the alley, saw a guy about my size sleeping, and carefully untied and removed his shoes. Then of course I got the hell out of there!
Posted by dbkundalini at 5:27 PM

Labels: crime, criminals, Nothing To Live For, shoes, violence