Where's All The Trash Compactors? 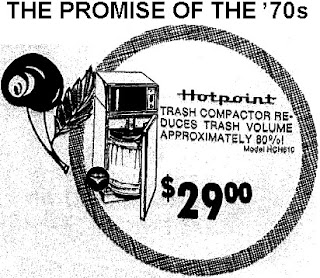 SUPER CHEAP TRASH COMPACTORS FOR ALL!

Friends, I have a trash compactor: My foot scrunching it down to save money on trash bags! I know, I know, very grim humor.

Like everyone, I too looked forward to a bright future of electric trash compactors for everyone. Where your garbage would be smashed down about the size of a grape. We really wanted that "brave new world" of very tiny trash (Alvin Toffler, Aldous Huxley.) Making it a true "future shock" when it didn't happen.

I don't know for sure what happened. I haven't seen an authoritative report on the subject for years. Whether everyone forgot what they promised, or it was found not to be feasible, or there was some other more sinister reason, this is what I don't know. I could let my mind wander ahead of me and conceive what might have happened, but I hate to rouse forces that are too powerful for me once exposed.

For now, I'll just pretend that I think it's a case of forgetting or the idea not being feasible. It's too dangerous to suggest something more sinister, although naturally the mind can barely help spotting a conspiracy. Just like cars that were supposed to have such fuel efficiency we'd only stop at a gas station once a month. Although I can almost see the logic to that conspiracy, since gas stations would never be able to stay in business, then when we needed one once a month, there wouldn't be any.

The fact that we don't all have our own trash compactor might be similar. Who makes the big huge dump trucks that pick up the big huge trash? The car companies, the same industry! They make big money at it. If we all had trash compactors, then any little entrepreneur with a push cart could make a sweep through town and pick it up himself. Then there's all the others with a vest interest in keeping garbage big: garbage bag manufacturers, city workers, tire makers for the trucks, etc. Even recyclers are in on it! Since they want their garbage pristine, many not even accepting flattened cans!

The government itself might be involved. And my opinion on every conspiracy is the same: If the government might be involved, they definitely are. Because these are always the guys with the best access to the strings from which everything else dangles. I myself could serve as a microcosm of what's going on, thinking back to the year I got the marionettes for Christmas. When you haven't got them, you're very content not to play with them; you don't know any different. But when you get them, you can't help playing with them and making them jump. So it is in government.

We all thought things were going to get better when the year 2000 got here, rich and poor alike. A trash compactor for $29 or cheaper! But we all saw how that worked out. The "future" was exactly the same as the "past," a scarcity of trash compactors and no push to do anything about it.
Posted by dbkundalini at 7:12 AM