Cursing Your Cup Of Coffee 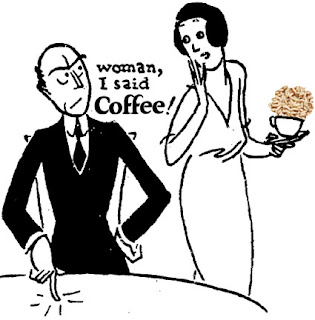 Just like 50 is the new 30, coffee is the new nectar of the gods, that which we archetypically need in the course of the day to maintain our divinity. Hence, every threat to our cup is a slap in the face or, worse, the possible destruction of our manhood or maidenhead.

I've been fairly well immune to this so I'm qualified to speak on the subject with some detachment. I've always been averse to spending more money on coffee than I need to, so you're not likely to see me walking out of Starbuck's with a $5 drink. This is the honest to God truth: I have yet to spend my first dollar in a Starbuck's! But we see them all the time, the same dolts who'd buy their kids $10 worth of snacks in a convenience store every time they stop for gas, walking around with their precious coffee! It's like lifeblood!

So, as to what I've said thus far, obviously I'm not too far off base. With the same thing applying for what I've still yet to say. Thanks to my perspective, and the detachment of my observations, everything I say has to be the absolute truth. Or better.

And here's what I have to say: If you want to curse someone where it hurts, don't wish them bodily harm; we have doctors for that. Attack their coffee! Curse their cup!

That's the way I'm doing it from now on. I used to carry generic voodoo dolls and big darning needles. Then when someone insulted me, I'd take one out in the full view of everyone and make silent gestures as to my intentions: This doll represents this particular bastard. These needles represent my wish for violence and misery for him. I hereby curse you, first, and now I attack you physically, albeit without any obvious cause and effect that would hold up in a court of law.

Be all that as it may, frankly, people don't feel all that threatened anymore by that. Again, they've got doctors if they find themselves physically dying. Aha! But attack a man's coffee or a woman's coffee! Do that, then stand back and watch the sparks fly! You simply say it! And make gestures toward the cup! They've seen enough Harry Potter movies, they believe it, and I'm not saying it's not true!

You could come right out and say it: "You've insulted me for the last time. I curse your cup of coffee. Drink it to bad health. May it bring forth vermin and maggots. Or just vermin if maggots are also considered vermin. I hate to be redundant." Or you could shorten it to simply: "I curse your cup of coffee," leaving them not knowing whether it's safe to drink. Or you could just mentally curse their coffee, then walk away, leaving them behind. Then next time you pass by a few minutes later, you see them writhing on the sidewalk outside the coffee place. With vermin and/or maggots making the most of things.

The basic message here is, Don't insult me. Because see that cup of coffee in your hand? It'll be crawling, and it won't take long!

Note: In case my picture isn't clear, that's maggots in the cup. I always thought maggots were white but these look like brown maggots, possibly healthier for you, or it could be the coffee discolored them in the transubstantiation process.
Posted by dbkundalini at 11:04 AM