My Criminal Carpet Store Is Closing 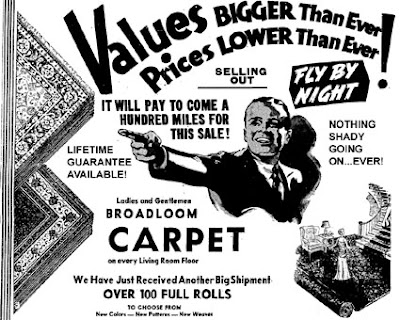 I see now why criminal fly-by-night carpet stores never last! Thankfully, we're selling out today and moving on. And not a moment too soon!

I've had so many irate customers in the store today, I've had to be in disguise to save myself. What I did, and I hate to stereotype the poor rubes, but it's not like they're going to notice, is dress in bib overalls to fit in, pull a big floppy red felt hat with ear warmers over my head, and walk around with a weed in my mouth. When I'm near someone complaining, I'm just as irate as them, calling for the manager's head. Then when I'm with a fresh new customer, I drop the weed and hick accent and make a quick sale.

Fortunately, the organization, being familiar with the pattern of this particular shady branch of merchandising, sent me a few helpers to carry in returned carpet and carry out new carpet, in most cases being the exact same stuff! There's been a line of people at the refund counter all day, but they've been put off by claims of the cashiers going on break, computers being down, and the bank screwing up our cash flow. After a while, we'll tell them to come back tomorrow, for their convenience, with the promise of refunds being ready to go. But of course there will be no refunds, and by then the store will be vacant.

As for all the new carpet being sold, since we're so swamped, I told the helpers to not even bother putting "Three Week Protector" on it, which is meant to gum up the tufts at the root so it won't fall off for a while. At this point, what do we care? If it falls off in the customers' pickups and trucks, and if they're able to register a complaint -- since we're so damned busy -- they'll have to prove it wasn't an act of God. And if they happen to have a lifetime guarantee, meaning they can bring the carpet back for a full refund if even one strand is out of place, I believe there's something in the small print about acts of God being excluded.

The two memorable couples we had in here yesterday have been back, angry and crying, the whole tiresome bit. The old couple who wanted a throw rug but was sold enough carpet for two whole houses were crying about what they called "a swindle." I don't know about you, but to me that's a hurtful word, calling into question my character. I don't like it. But I thought, They're old and don't know any better, so I took them back to my office and told them about my own dear grandparents and their hopes for me. By the time the three of us dried our eyes, I had sold them enough carpet for an additional house. And to sweeten the deal, as a tribute to my grandparents, I graciously gave them two lifetime guarantees for the price of one.

Then there was the younger couple, newlyweds, who had foolishly spent all their monetary wedding gifts and their tax refund on a mountain of carpet, based on the sales pitch that prices in the future will always go up. They were very irate, especially the groom, trying to prove his manhood. But I softened him up, telling him it was a lucky break that he came back when he did. I said, "You couldn't have timed it better if you tried!" and clapped him on the back as congratulations. He calmed down. I explained how it seemed clear to me he was a real wheeler-dealer, knowing we had a big 50% sale going on today. His wisdom, I said, was to back me in a corner, knowing I'd "cave" and give him an extra 10% off. Fortunately, they still had nearly $200 to their name. So, with 50% off plus an extra 10%, that meant they'd be able to get ... [figuring here] ... "You know what? $200 will completely cover it, and I'll even throw in a dozen free lifetime guarantees! Son, you drive a hard bargain!"

It's been a good run for me, managing a carpet store. We had a great run. And it's a little sad to see it end, but we had three wonderful days. And you can't ask for much more than that. Now, if I can only make it through the rest of the day -- all the way through vacating the building and running -- it ought to be interesting what comes next, what the organization has for me. Whatever it is, I'm sure it'll be great. Ah, yes! The criminal life, that's for me!
Posted by dbkundalini at 3:32 PM