The Funerals Of Those I Killed 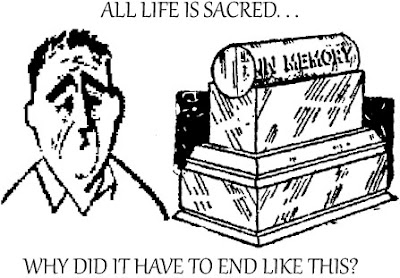 I gotta tell you, I'm numb, wrung out. It's been a very downer day, one of the worst. It's tougher being a criminal than I could've ever imagined. A weird mix of adrenalin and testosterone and we kill easily, then it wears off. "Did I do that?" There was a story the other day about a guy who lived with the skeletal remains of his girlfriend for six years. I know the feeling. It's tough to get over what you've done.

It's even tougher for me, because I'm still a fairly new criminal. I just started this month! And I'm having a hard time shaking the person I've always been, a non-criminal. Killing guys has its upside, don't get me wrong, but there's something unnatural about offing other people's enemies who aren't your own.

So far, though, I'm relatively innocent. I've only killed three guys, two I didn't know and one I was familiar with, the Ciggie gang member who wanted to bar me from Tastee Freez. The first two, I'm not sure what they did to deserve death. Maybe it's like the minister said, they were "senseless deaths." As for the Ciggie, try as I might to be merciful, I believe he had it coming!

Don't worry about me, though, please, because I'm going to get it. Although I'll probably have to do something different than I did today, which was to go to these sons of bitches' funerals. That might be a first in the world of crime, to have three funerals in one day for guys who were killed, then to have the guy who did it in attendance. But nobody knows I had anything to do with it. So I, Machine Gun Ricky Wayward, can come and go as I please! LOL, kind of funny, to be sitting there as these scumbags are canonized! Assuming indeed they were scumbags...

The first two, I don't know. Maybe they owed something on a bet, or hooker fees. And that's fair. You owe, you pay. We provide a valuable service, but it doesn't pay for itself. Their funerals were similar, each in the same funeral home, one in the morning, one in the afternoon. The two ministers consoled the families. One guy had a wife and a couple of kids, the other was single with an elderly mother, looking to be on her last legs. Of course I had my natural sympathy, offering the wife, then the elderly mother my condolences, while reflecting they were straight out of Central Casting. Right down to the worry wrinkles on Mother.

The ministers didn't make a full exploration of how they were mixed up with criminals. Possibly they didn't think it was the time or place. One's biggest lamentation was reserved for the "animals" who did this, and for how "senseless" it all was. I had to wince at the "animals" remark, prompting me to remember him, remember his name, then any physical characteristics that might stick out were I to encounter him some night in the dark.

The Ciggie's funeral had more spirit to it. They were playing '80s rock music, and a contingent of about 15 actual Ciggie members were there. I was dressed in a suit and tie and kept closer to the normal mourners. None of them seemed to recognize me, which was just as well; I may predate the '80s in my basic musical background, but I'm still too young to die.

The minister here, though, was just as conservative and reserved as the others. He paid tribute to the Ciggie's life, naming among his hobbies, painting farm scenes on saw blades and restoring wagons to share with handicapped children. He and his wife -- she with a sad stoic look -- also volunteered at the nursing home, handing out bananas and other prizes to the folks there enjoying Bingo night.

I had to check the program to make sure I was in the right place. This guy deserved to die?! Over a possible misunderstanding about Tastee Freez?! I'm thinking, What kind of animal would do this? Then, of course, it all came back to me... Oh yeah, he was a son of a bitch!
Posted by dbkundalini at 4:49 PM