Criminal Carpet Store: Everything Must Go! 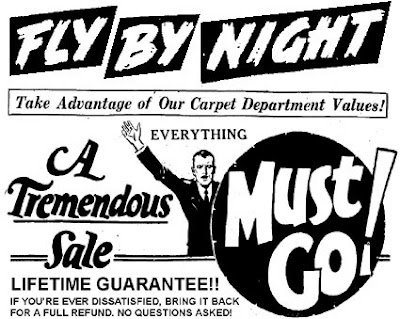 The carpet store just opened yesterday, and already today we're declaring, "Everything Must Go!" The lifespan of the criminally-operated fly-by-night carpet store being a week at the max, everything has to be very compressed.

We had a great day of sales yesterday, on our first day, and now that we trying to thin out the excess merchandise, of course the values are great. My personal recommendation to each of you is, If you need carpet, you better get down here, because it's going fast!

Customers were waiting at the door when we opened. I quickly scanned the crowd for anyone from yesterday who might be back for a refund or with a complaint, and seeing none, I stayed in sight. I welcomed them in, feeling very robust, but now that the day is wearing away, I'm getting a little fatigued. Still, as long as they're spending money, I'll be here to take it. Proudly! Knowing they're getting value for their money, something pretty resembling actual carpet.

So things have been going great. Except for one little thing. When I got here this morning, there was a minor fiasco. Some of the boys from the gang had brought in some new rolls last night which I didn't know about. I sat down to take a break and put my feet up on one of the rolls. I was shocked when the tufts started coming off on my feet. Obviously, they hadn't been gummed down properly with "Three Week Protector," so I had to fly around spurting it on haphazardly. There was no time. The only thing I've worried about today is if there's carpet coming off on people's hands while they're carrying it out. But there haven't been any complaints. I'll just have to be extra careful when opening tomorrow.

Like I said, sales have been great. The psychology of "Everything Must Go!" really plays with the folks. Who knew? They're more interested in scoring carpet before other customers get it than they are the price. Giving me the opportunity mid-morning to raise the price 10%, and no one complained. And since they're really stocking up, I've sold lifetime guarantees and all the various cleaning kits and supplies with every order. Every order except one. A teacher stopped in for a remnant for some school project, a little square, and she wouldn't buy the lifetime guarantee.

My two most memorable sales went to the very old and the very young. An old couple essentially needed a throw rug for their hall, something they said would be about 2½ foot by 8 foot. But I saw an opening for a bigger sale if I could keep some fast talking going, get them confused, and quickly close the deal. So they went out with enough carpet for one or more houses. My biggest fear was their skeptical son, who had to bring his truck to pick it up. But one of the guys told him I was on break.

The other sale was to a young couple, flush with cash from two sources, marriage gifts and their tax refund. My sales pitch was to buy all the carpet you think you might need in your life, because the prices are only guaranteed to go up. So they really loaded up, the young man's father having to rent a U-Haul truck to take it all away. (He was also skeptical.) As to the lifetime guarantee, they needed several, because I came up with a new policy on the spot that a lifetime guarantee only applies to a single type of carpet, and they bought several different ones. Plus, there was two of them, a husband and a wife, so that's two guarantees needed right there. Hey, no one held a gun to their head, although of course that could've been arranged...

We're raking in the money. Faster than printing it. And my aim is to do everything I can to rake in more. Because if I excel at this job, who knows what heights I might rise to in the organization! This time next week I could be one of the big bosses, if not before!
Posted by dbkundalini at 4:11 PM