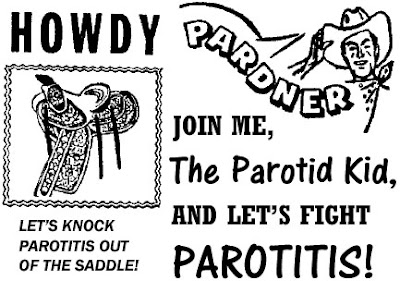 Hey, all you buckaroos! You all know I'm in a very big battle, to knock out and beat parotitis! And I'm askin' once again for everyone's help, all the help I can get, with parotitis coming in like it does, rustlin' and puttin' its brand on a lot of jaws.

I took up the fight a long time ago, when one side of my dear old Ma's face swelled up big as a steer's head. I said, "What's the matter with your face, Ma?", and she said one word I'll never forget: "Parotitis!" The old doc told her, "Yep, ma'am, that's what you got!"

And she stayed like that, tryin' her best to break the thing's grip, but she just couldn't. So before we knew it, she wasn't chewin', swallowin', or even talkin' quite right. She could only make a few bare little peeps, just enough for us to know she was restless and needed put back in her bunk. And that's where she kicked the bucket, with her boots on, and her face all puffed up big as a barn.

When you see somethin' like that, and it gets your own mother -- as good a ma as I'm ever likely to know -- it sticks with you. My ma was special, but she didn't do anything special to come down with parotitis. All she did was get up one day and start complainin' of some little puffy spot under her jaw. Then it got bigger and bigger, and before we knew it, it was full grown and all spread out!

The old doc said this was a problem in somethin' called the parotid gland, with there being one on each side of the face. He said somethin' about them being "found wrapped around the mandibular ramus," and that they "secrete saliva through Stensen's ducts into the oral cavity, to facilitate mastication and swallowing and to begin the digestion of starches." Wee doggies, it was all I could do to follow the old boy! A lot of 50 cent words there!

Well, it turns out -- and wouldn't you guess? -- things can go wrong with these glands, and they sure did with ma! You might've heard about, or even had, the mumps? That's the most likely cause of parotitis. But they vaccinate for mumps, so there's not so much of that anymore. But other random bacteria, varmints you can't see and don't expect, can also crawl in there, like a dog maybe to die, but they find a decent home and start eatin' away. Then they start breedin', and pretty soon you've got a whole herd of bacteria stampeding under there and no place to go! And next thing, that's a tumor!

Now, you're sayin', we can cut out a tumor! Well, yes and no. Because there's somethin' called "the facial nerve parotid lodge," and that's where you'll see a lot of the gang holed up. A lot of the gang. But if you don't get the whole blamed bunch, and leave behind even a few stragglers, maybe watchin' out in the hills, the whole bunch can just come back! And madder than hornets! So these varmints, you gotta catch 'em early!

Well, you know The Parotid Kid's in the fight, that's for sure! But I need a bunch more pardners to lend me a hand. So how about you? If I can get you and you and you and you to help out, and let everyone know about one tough hombre, called parotitis, maybe we can get 'em all corralled and wipe out the whole blamed gang, once and for all!
Posted by dbkundalini at 4:38 PM