Do Criminals Just Know Each Other? 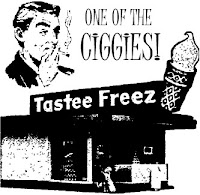 This is the last thing I would have expected! I've been around this town all my life, and nothing has been off limits to me. I went about my business in all parts of town, never giving a single thought to whose turf it was.

And that's the way it is for everyone else. We always go freely wherever we want, to the grocery stores, gas stations, garage sales, and really everywhere. Sure, I'd always heard rumors about criminal gangs, but since there was never any trouble from them as far as I was concerned, I figured they had a clubhouse somewhere and the rest of the rumors were just overblown.

Now it looks like I might have to watch my step, now that I too am among the criminal class, officially a member of the Skids organization. I've got a map of the town at this link, how the gangs have everywhere divvied up. The Skids have the central district. If you look at the map, we're the only landlocked organization, which might pose a problem if the others get the idea of starving us into submission. That's a fear I have now, a fear I never thought of before, again, because of the easy, unimpeded access to the town I've always enjoyed.

I was going on that assumption earlier today when I buzzed out to the Tastee Freez for a hot fudge sundae. Of course now I know the Tastee Freez is in the Ciggies' district, something that never occurred to me before. I have literally never had any inkling of it. But today, there I was, and a guy with a cigarette stopped by my table and said, "I smell a Skid." I thought, What? I don't smell any different than I ever did, I hope. But I suddenly realized, maybe I do! I haven't been home for several days. I've been sleeping on a couch in one of the empty places on Skidrow, right in the heart of the Skids' headquarters. This guy's obviously honed his senses, if he's able to smell out that you're a criminal and which organization you're with!

I thought maybe I could be cagey, saying, "I don't smell anything, except that cigarette, and I believe this is the non-smoking section." Little did I know he wasn't in a mood for sass. He grabbed me by the lapels and lifted me from my chair. I felt ridiculous, hovering between heaven and earth with a little red plastic spoon in my hand. If I'd brought a gun, I could've killed him and finished my sundae at my leisure. As it was, I'd be lucky to escape with my own life, not to mention my investment in the ice milk treat.

But I thought, This is no time to show fear. You have to show confidence in the face of these bastards, criminals. So I said, "Put me down, Ciggie, if you know what's good for your health. Of course you don't or you wouldn't be dragging on that butt!" He smiled, a big tar and nicotine brown smile, not quite as brown as the hot fudge but still brown enough. Then he lowered me back to my chair. I looked in my bowl. Not much had melted during the interlude.

He pulled out a chair, but instead of sitting on it normal, he flipped it around and sat on it backwards. I thought, Good grief. I'm a criminal myself, but this dude's classless. He proceeded to lecture me about turf, and that the Skids needed to stay in their own place. He pointed out, rightly, that we have a DQ right on the edge of our turf. I allowed that, that he was right, but said I'd been eating at Tastee Freez for years, like everyone in town. "That may be," he said with menace, "but those days are over. Now you're a Skid!"

The whole thing hit me in a terrible way. Just because I'm a criminal, I'm not allowed to go to Tastee Freez!? It's almost enough to scare me straight! What good is a life of crime if you're restricted like that? And obviously if I can't go to this one store, then everything else is off limits, including garage sales. And I've been to a lot of them in this section of town. It's sort of middle class, not too rich, not too poor, so the garage sales are pretty good, things not usually overpriced like in the rich section, but not dirt quality like you see in the poorer neighborhoods. I'm going to have a hard time adjusting!

How did he know me? Was it truly just the smell? I didn't smell anything. If every criminal knows every other criminal, that's really going to cramp my style!
Posted by dbkundalini at 6:38 PM