A Psychotic vs. Romeo & Juliet 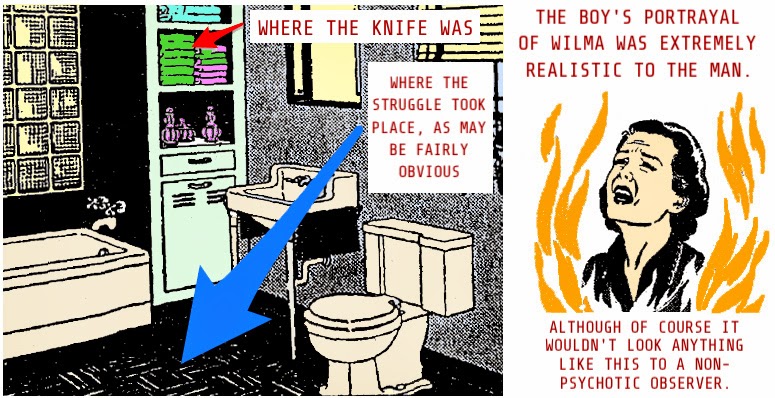 Editor's Note: I don't feel bad about writing this, if that's what you're thinking. What? Should I feel guilty? I'm sorry, I don't see it that way. Thank you for your kind indulgence. Editor out!

Have you ever been attracted to a girl, and say you become something of a couple, and then you're invited over to meet her parents? That happened to me once. I can still see (in my mind's eye) her father sitting in the corner, in an easy chair, reading the paper. He barely looked up at me, and whatever acknowledgement he gave of my presence was very much like a dismissing growl. Not a good experience. But at least I got out of there alive, unlike this other guy I heard of...

They had to reconstruct exactly what happened from the girl's sworn testimony. Because the boy didn't make it out. The father actually made it, but he was such a psychotic, his testimony would be worthless, sworn or not.

It was just like my situation, she took him home to meet her father. Mom apparently wasn't in the picture. As it happened, Dad was in the bathroom with the door open, right off the hallway, so she took the boy there. Dad was shaving with one of those Norelco-type electric jobs. You know the type? They're strictly no fuss, no muss...

Of course the father looked out the door askance at the boy, being sensitive to such things, meeting new people, possible boyfriends. I'd guess it'd have something to do with a house being a man's castle, but it's just as likely there was more of a personal revulsion, because, as we'll learn later, he was completely psychotic. Which can be a bad scene.

But it was the boy who started having a reaction to seeing the dad with the Norelco-like device. Which could've been a reaction based on something physical at the scene, like pheromones. I know that's common. It sounds like he sensed death. The girl said he whispered something about being worried, and she could see him sweating, like he was afraid the father might do something in despair, like cutting his wrists with the shaver.

I can only imagine what he was thinking: What chance will I have with her if I'm responsible for her father's death, him bleeding to death in a bathroom she'd never be able to use again in perfect peace? That's an entirely logical question to ask oneself. I know I wouldn't be comfortable under those circumstances, unless I really had to go.

The best thing the boy could do -- the only thing, really -- was treat her dad somewhat warily, lest he have an active psychosis thing going. It's obviously a bad combination when you have a sharp razor and an active psychosis. You'd have to think, He might fly around the room killing us all, not just himself but me and his daughter. It'd be Romeo and Juliet all over, a perfect one for one parallel.

Really, though, what is it with psychotics and weapons? They're not able to do one single other thing right in life -- cause and effect completely elude them. But there is one thing they're good at, weapons and complete destruction; that they're good at!

OK, this is where the girl's sworn testimony comes in. The boy handles the threatening situation based on something he saw on TV, where they brought in a guy's aged mother to talk him down. Going on the assumption that if the guy's psychotic, and not good at any cause and effect sequence apart from weapons, it would stand to reason that portraying his mother might do the trick.

So the boy whispers to the girl, "What's your paternal grandmother's first name? "Grandma?" "No, her actual name." "Wilma."

"Hello, sonny, I'm your old mother Wilma. I want you to listen to me and behave," and he goes on with that line of thinking, very simple and direct instructions or commands. The dad goes, "Mom, you've changed."

"No, no, sonny," the boyfriend said, "I'm the same old mother you've always loved. Back among the living and feeling better than ever."

Like that, then, he's calming the guy down more ... more ... ever more, and finally takes possession of the shaver. But suddenly the dad lunges for a knife behind the towels, comes at the boyfriend, and immediately kills his "mother." To me this is the ultimate proof of his psychosis, although some readers might surmise it was an Oedipal thing. I really wouldn't disagree, but it's that from a psychotic point of view.

And so it's true, they were Romeo and Juliet, paralleled. Shakespeare was right about so many things, including the biggest from Romeo and Juliet: Some families simply should not intermarry. Because there's bound to be trouble. The parallels are beyond spooky.
Posted by dbkundalini at 8:36 AM